Harm is already covered as a rejection reason:

We have two rejection reasons already for edits that cause harm:

spam or vandalism
This edit defaces the post in order to promote a product or service, or is deliberately destructive.

no improvement whatsoever
This edit does not make the post even a little bit easier to read, easier to find, more accurate or more accessible. Changes are either completely superfluous or actively harm readability.

and to an implied extent, this reason:

clearly conflicts with author's intent
This edit deviates from the original intent of the post. Even edits that must make drastic changes should strive to preserve the goals of the post's owner.

There's a lack of clarity over when to use the "causes harm" rejection reason:

I'm an avid user and only learned that the "causes harm" reason can be used to write custom messages after posting a question and reading this comment:

No, that's really just a custom reason box. It doesn't say "causes harm" anywhere on the rejection. The idea is that you are only supposed to reject edits if they cause harm, though, not just on a whim. Obviously if you abuse it, someone will ask you to stop.
– Cody Gray♦

I had never tested this, as I didn't realise there was no consequence from writing the custom reason. The description implies that it causes harm.

In my opinion, the UX/UI should be intuitive and meet the user's expectation.

There have also been requests to be able reject an edit for a custom reason, which would satisfy the desire for other rejection reasons brought up on Meta.

I've started using the "causes harm" reason to leave custom rejection reasons. The advantage of this is that I can explain to the user exactly why I'm rejecting their edit, and also tell them if I believe there is a better course of action. (Example 1 and 2).

Concerns about abuse or misuse of this new feature

There's some concerns in the comments that trivial edits will be rejected and the custom reason being used to explain why.

My big fear with renaming this to "custom reason" is that it'd be used to reject edits for being "too minor". The "causes harm" label makes clear that that's not a thing you're supposed to do - that as long as the edit is making the post strictly better, it should be approved. Allow any old "custom reason" and people will use it to reject edits for, say, fixing the unreadable code indentation but leaving the ungrammatical code untouched, or vice versa. Perhaps renaming to "makes post worse" instead of "custom reason" would do as a compromise between our positions.

This is not necessarily a bad thing. In fact the reverse is true; the fear of bad edits being approved.

Making trivial suggested edits is not acceptable. They bump the question to the home page. They may indeed not make the post worse, but are not within the keeping of the spirit of making edits to improve posts. Making a trivial edit and leaving obvious formatting issues, is not ok.

From the help center:

Tiny, trivial edits are discouraged - try to make the post significantly better when you edit, correcting all problems that you observe.

Changing the box name will only assist in helping frustrated reviewers communicating with a user making a series of trivial edits to game rep.

Up until now, I've had to find the user's latest answer and post under it to make a mention of where I think they're going wrong. Of course this can be done in the causes harm box, but if it was named custom, I wouldn't have been tracking down users for the past few years, if I'd known how to use this custom box.

If there's any concern about anything abusive being written in the reason box, these can be flagged. Most users who have the rep to review suggested edits, understand how the site works and would understand that everything is transparent and users are held accountable for their actions.

Besides, it takes more effort to write a custom reason, than to click on one of the canned reasons.

Therefore, can we rename the "causes harm" reason?

I think we should rename this to "custom reason": 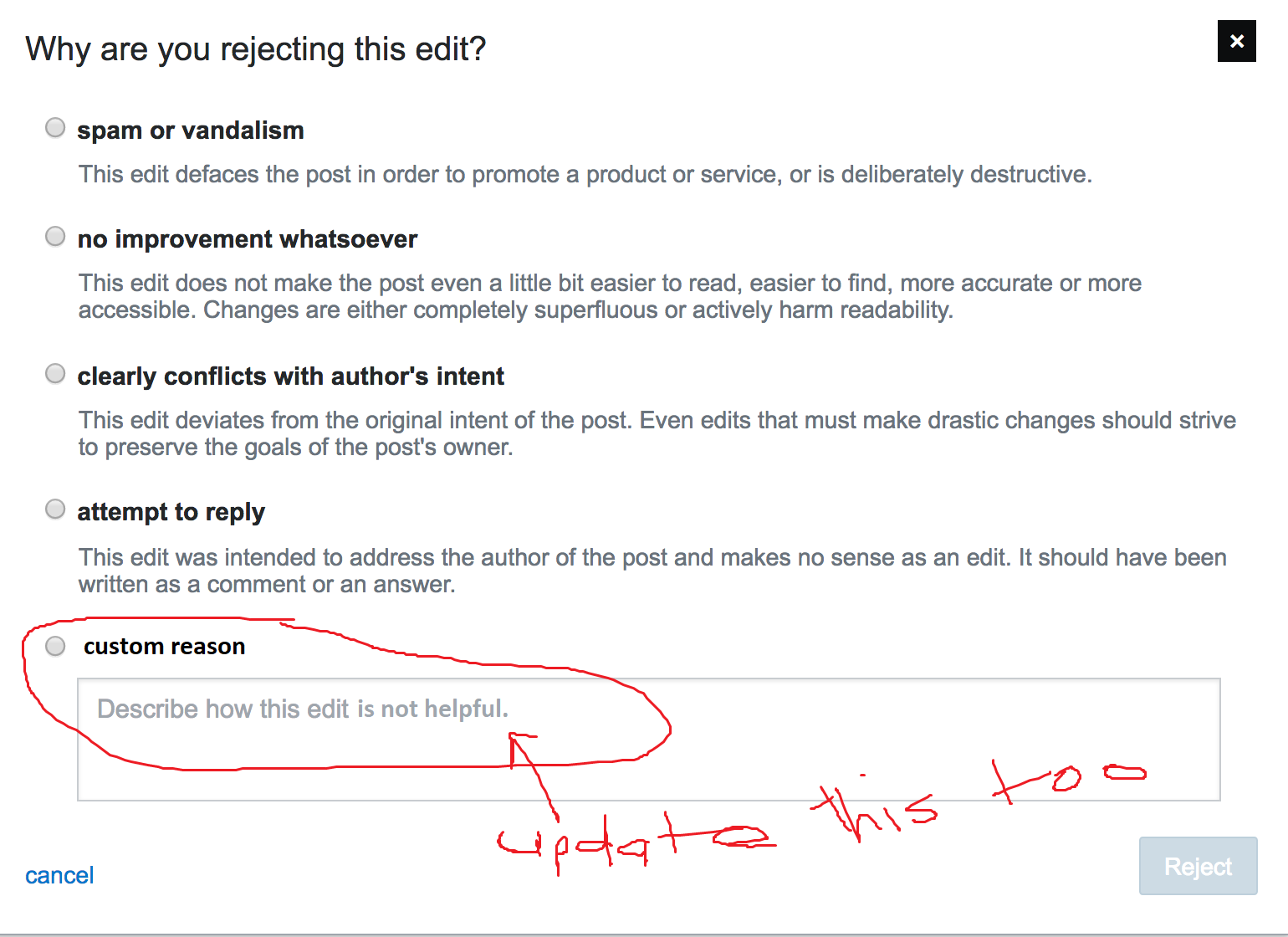 (This was previously requested by S.L. Barth on Meta Stack Exchange.)

But the text on the last reason exists only for the reviewer. The editor will see what is typed; the text on the dialog is entirely for guiding the person rejecting the edit. To this end, it should endeavor to constrain the potential reasons that may be entered: certainly we don't want edits rejected because a reviewer disliked the editor's username, or lost his keys!

The current guidance is simple: explain why the edit made the post worse. A quick scan of the reasons being entered suggests that this is more than sufficiently flexible:

wrong use of quote-formatting, adds noise

Code blocks should only be used for code, not "python" or the problem description, and the emboldening is unneeded

Too insignificant to bother with.

this is just polishing turd.

...to list an arbitrary few of the 700-some rejection reasons entered over the past 30 days. Note that the most common reason among these is some variation on "abuse of code formatting", which is a great reason to reject an edit.

In short, I don't feel that further generalizing this buys us anything; no amount of discussion on meta can replace guidance that's ready at hand in the UI, and your suggestion weakens what little guidance now exists for that last reason, requiring a reviewer to gauge the usefulness of an edit (a notoriously controversial concept) rather than simply examining it for harm.

I would be open to suggestions for improving or further clarifying that existing guidance however.

I am in favor of changing this because currently the option does not accurately describe what it does. What we do with it depends on what we want it to be.

Right now, it functions as a custom reason box. Your custom reject reason is what is shown to the editor, and nothing else (I personally have not used this box as much as I would have because somehow I thought that "causes harm" was also shown to the editor, which it is not, as I only recently learned). However, the title indicates something different, and so it's sort of masquerading as something other than what it is.

Do we want a custom reason box? If not, well then let's drop it. If so, however, we should call it that. Are we concerned about it being abused? Yes, but having a custom box at all inherently allows abuse, so it comes down to weighing the risk over having the box at all. Honestly I think the suggested edits queue much more frequently suffers from the opposite problem (bad edits being approved).

If we also desire to keep the "instructions" to the reviewer that are implied by the current "causes harm" title, perhaps changing the placeholder text might do the trick. It already contains a directive to the reviewer, we could change it to something even more direct and bold. That way the entire UX makes sense.

45
Let us bring an end to the "robo-reviewer" war: Phase 1 - 2
44
How should I handle a suggested edit with "Comment: gerhdtcfjvygkbuhnj" as the edit summary?
41
Where is the line drawn between "no improvement whatsoever" and "causes harm"?
15
Another suggested edit reject reason, when much of the post is left in a mess?
35
What to do when I find a user suggesting a large number of trivial edits?
15
What is the difference between Vandalism and Causes Harm while reviewing an edit?
15
Can we have a suggested edit rejection reason for editing posts that are of very low quality?
-6
The gradations in the edit rejection reasons are insufficient
1
Is there any way to provide feedback to editors from the suggested edit review queue?

14
Should custom suggested edit reject reasons be presented in the inbox?
15
What is the difference between Vandalism and Causes Harm while reviewing an edit?
4
Which proper reason should I choose to reject this suggested edit?
23
In the suggested edit review, the user should be asked for a rejection reason when choosing "reject and edit"