Another suggested edit reject reason, when much of the post is left in a mess?

Can we have another suggested edit reject reason, when much of the post is left in a mess after the edit?

This edit does not fix many issues within this post.

I'm sure there's a better way to phrase it.

The no improvement whatsoever doesn't cover it, when the edit may have made improvements, but left a lot of formatting issues. The explanation for the rejection offers no guidance to the editor, and it would be better to let people know where they're going wrong. 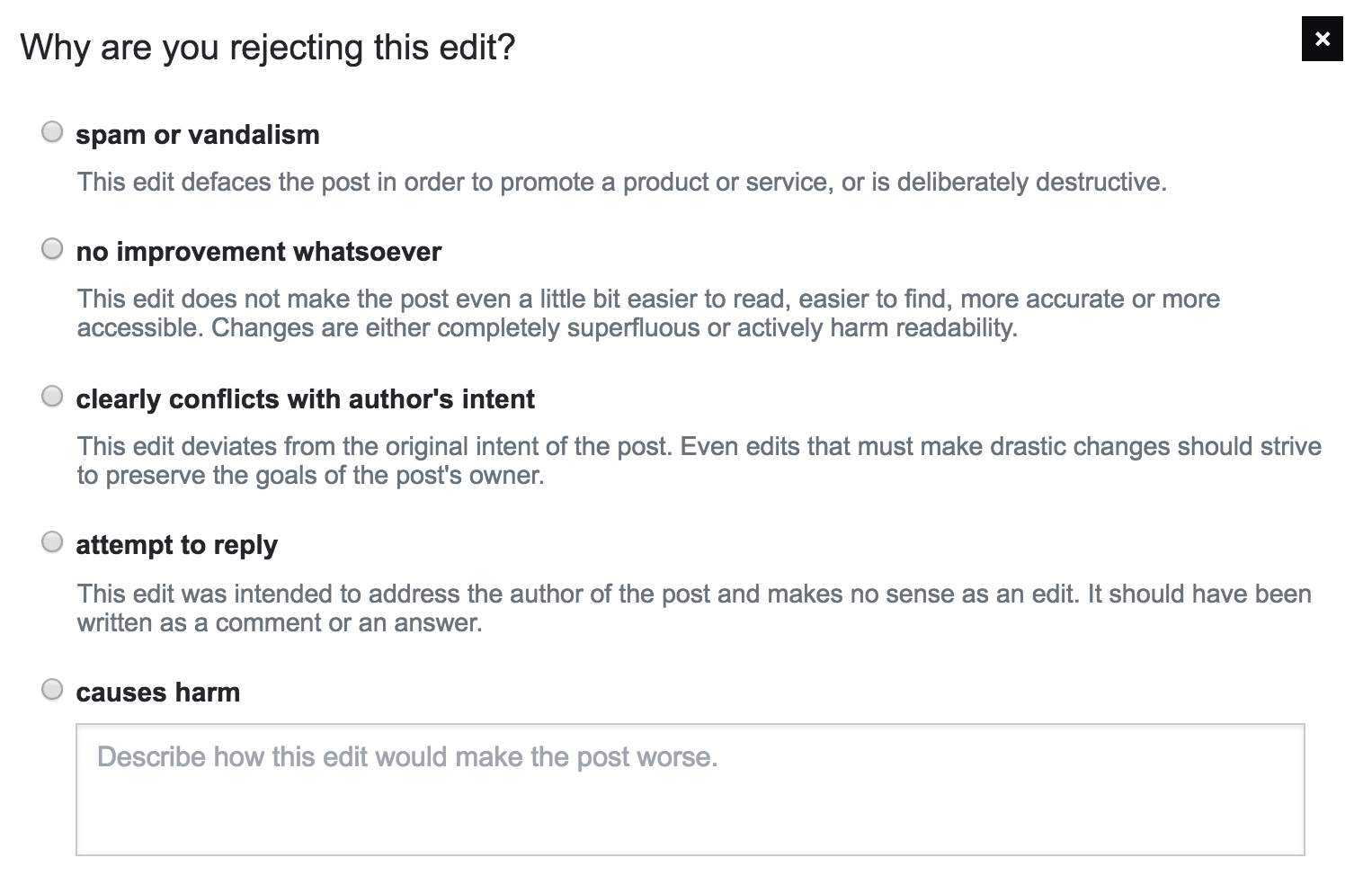 We used to have "too minor". But it was removed because SO felt that its meaning was unclear.
See here for Shog9's request to have it removed.

The decision was explained here (thanks to @Josh Caswell for pointing it out in their comment).

The guideline is to edit yourself. Of course, that's assuming we have time to fix all that needs fixing.

As @Cody Gray points out in their comment, you could also reject with a custom reason. To be honest, I'm not sure that will do much. I've told countless editors not to use code markdown for product names, but they happily went on doing just that. So I don't think they give custom reject reasons much thought.

If you want to bring back "too minor", you'll have to give a clear criterion what constitutes "too minor".

It feels a bit odd that we have the guideline to always improve everything there is to improve when editing and not just editing some of it, yet there isn’t a way to properly reject edits that simply do not follow that guideline.

So maybe we need a “Not complete” rejection reason which also explains the exact guideline to the editing user. Having this as an actual reason would also help reviewers to finally accept that they should not approve edits that just do some minor changes.

This edit is not complete. While it does improve the post, it leaves too many open issues that should be improved as well. Edits to posts should always try to fix all issues instead of focusing just on small improvements.

If the rest of the post is still a mess I just mark it as no improvement. The post was a mess before the edit and needed major revision (more than I can be bothered to fix with a reject and edit or accept and edit); and after the suggested edit the post is still a mess needing major revision; then this edit didn't improve things and you can use that as a reject reason.

Too minor doesn't work because people could use that to reject minor edits where there is nothing else to fix! But in this sort of case you are right to reject an edit.

While it is true that we should try to fix everything that we can in each edit, I don't like the proposed rejection reason.

With this proposal, the reviewers will reject edits that actually improve the post, if there are still other unrelated issues remaining. But stack overflow is a collaborative system, where people contribute based on their abilities and their time constraints.

I think that Incremental improvement should be encouraged, not discouraged. If somebody fixes the code formatting, but leaves a few typos, is that a detrimental edit? Isn't the post in a better shape than it was before? It still makes an unreadable post into a readable one. Somebody else may fix the typos if they bother them.

About the problem of wasting reviewer time, a better system would be to aggregate the suggested edits from multiple users on the same post, and have a reviewer approve the final outcome, after some delay.

If it definitively improves the post but there is still more to improve, then clearly the right option is Improve Edit. Give them proper credit for helping out some and fix the additional problems you see. If you don't feel like improving the post further, then just Approve. It's better to improve the post some than to throw away the improvements that someone already spent the time to make.

In other words, let's not be dogmatic and insist on perfection or overly strict rules adherence in what's already a subjective matter. Let's focus on actual post quality. Quality goes up = approve. Quality remains same or goes down = reject.

Another suggested edit reject reason, when much of the post is left in a mess?

You already have that option:

116
Disappearance of “too minor” — where is the relevant discussion?
43
How should I handle a suggested edit with “Comment: gerhdtcfjvygkbuhnj” as the edit summary?
60
Clarify suggested edit rejection reasons by changing “causes harm” to “custom reason”
17
Should I approve an edit that barely improves something

4
When to check “Suggested edit was helpful”?
36
Community♦'s rejection reason when I “Reject and Edit” explicitly contradicts established site policy and is worse than no message at all
7
How to act when I disagree with the rejection of my suggested edit?
60
Clarify suggested edit rejection reasons by changing “causes harm” to “custom reason”
28
Can I provide a reason when I reject edits as the owner?
55
Unrunnable/useless Stack Snippets in Suggested Edits
0
Rejection Reason - Unnecessary Formatting