As evidenced by the recent meta post: Introducing a new close reason specifically for non-English questions, a significant number of questions get asked in the wrong language.

Mike Nakis posted some good thoughts on why people would post in the wrong language in the first place: automatic browser translation is so good nowadays that one can perfectly use SO without speaking English.

In a quick test, I confirmed my suspicion that users are currently not made aware of the fact that they are writing in an unsupported language while asking the question in both question editors (traditional and wizard).

You can type a question in a non-English language, e.g. German (see below for demo), and will even get suggested duplicates in that language which in fact encourages an ignorant user to keep typing, as they see that others have asked/answered in their language before.

So here's the proposal: why don't we serve a suitable warning to users when they type in an unsupported language? Language recognition is a solved problem, it doesn't take many words to do it reliably. I could imagine that such a warning could reduce the number of closed questions a lot. At some point one could move from warning to not allowing questions in wrong languages to be asked at all. Like we do with questions that use certain words in the title: Stack Overflow forbids usage of the word `help` in question about CLI `--help` option.

Right now, one can easily type in a different language and not get any warning, why not prevent the user frustration of getting a question closed by hinting that one should write in English.

Sure it may not be that taxing to close these questions. But it's still wasteful for the community and the user formulating their question just for it to be closed immediately.

All sorts of heuristics block submission of questions, like ending a question title with "help?". I can't see how prompting a user that they are writing in a non-accepted language is less useful.

Ivar pointed out that there was an experiment for something like this in 2016. The logic used back then was extremely simplistic, probably oversimplistic, like using particular Spanish characters and words like "un" with high false positive rate. There have been significant advances in natural language processing since then.

Rene commented that closed questions are not a problem. Closed questions are unnecessary work for both the community (close voters) and OP who wrote a question just for it to be closed. With the same reasoning, there should be no auto-blocking of potentially bad titles/questions.

Andrew T. pointed out that there is prior art here, a community project to detect non-English questions so that they can be closed. Automation is nice, but wouldn't it be better to avoid the need for it by making users aware of the requirement as soon as possible?

MisterMiyagi and Makoto asked about mixed content: English language prose and non-English code/warnings/characters. Any decent classifier will allow tuning of when it fires. One can always start conservative: only show a warning if there is no or almost no English in the question. Also, it's not terrible to get a very occasional false positive warning saying "It looks like you are asking a question in a language other than English. Questions must be asked in English, click here for more details". Just click it away. We don't seem to have a problem with hard blocks of questions with "bad" titles, like if they end in "help?". 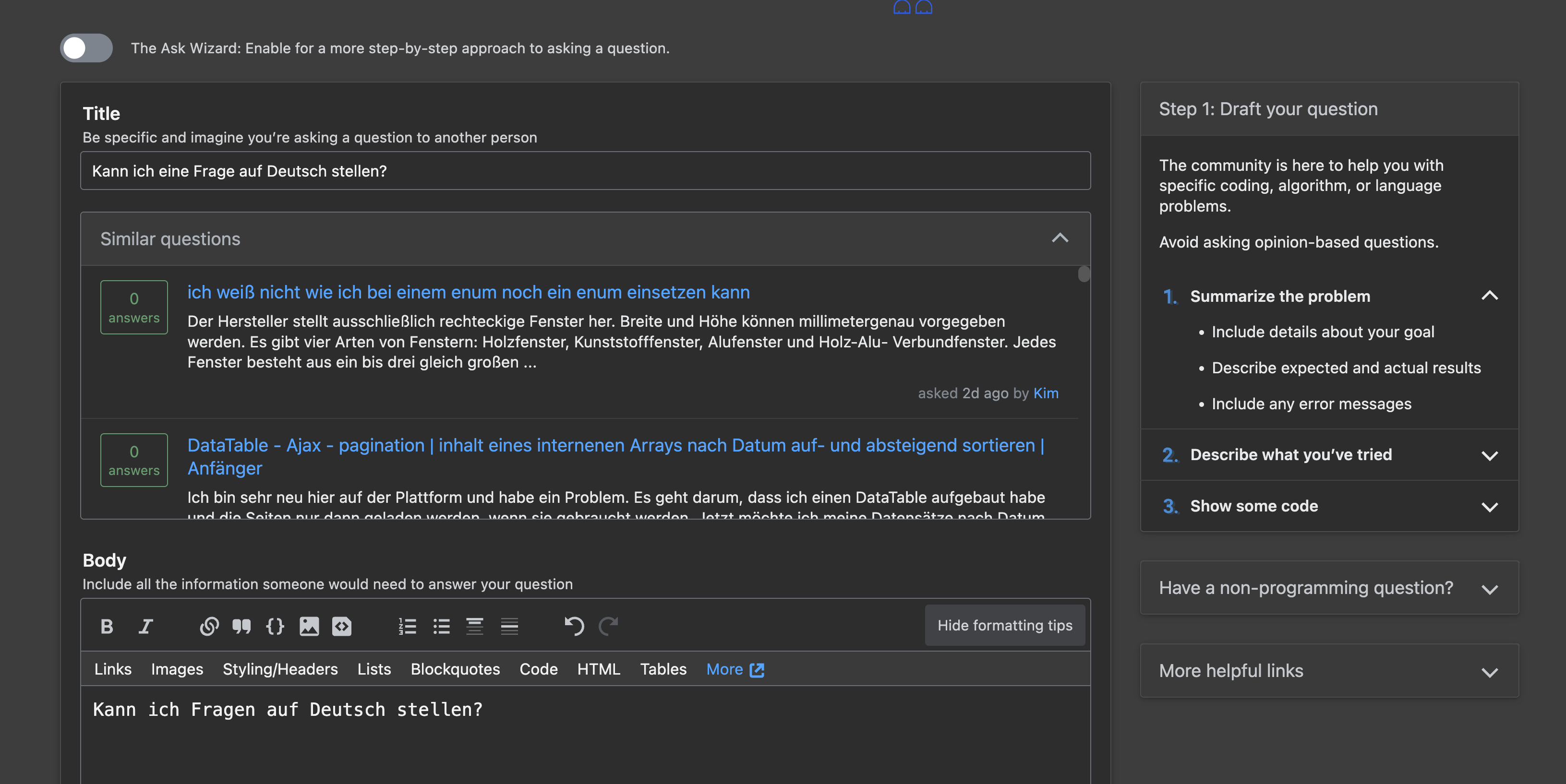 So here's the proposal: why don't we serve a suitable warning to users when they type in an unsupported language?

Because you can't tell if someone is asking a question in Japanese or if they're dealing with a data set that just so happens to contain ひらがな or カタカナ. The amount of false positives that you'd get would far outweigh the benefits of trying to selectively get a user to the "right spot".

Then there's the matter of someone writing their code in their native language, but asking their question in English. That has happened quite often and that would mean that you're going to get some seriously angry folks who are asking about their code - which happens to have Dutch variables - but are writing about their problem in perfectly legible English. That kind of false positive would be highly impactful and detrimental to question askers.

41
Non-native English speakers and asking a bilingual question
70
Should I encourage people to use the localized versions of SO?
19
Is it acceptable to write a comment in another language on a non-English post?
31
What would be the appropriate reason to give if rejecting a Suggested Edit of a question translating it from a non-English language?
37
Can the Tour page be updated to include "English language" wording?
51
Reject question titles with no English letters in them, warn about titles with too few a-z compared to other letters
14
Can I use another language than English on Stack Overflow for Teams questions/answers?