Where are new users supposed to learn that they should show code and error messages as text, not as images?

Recently I saw a question by a new user, where they showed the error message they were getting in the form of a screenshot of their IDE. I added a comment, telling them that they should include the error message as text instead.

They replied that they didn't know they shouldn't use images.

They didn't have the informed badge, so they didn't even take the tour. I read the tour page again, and it doesn't mention anything about images. So even if they did take the tour, they still wouldn't know.

Granted, it's shown prominently on the How to ask page, but the tour doesn't tell them to go read that page, it doesn't even mention that it exists (I searched the HTML of the tour page for how-to-ask).

I don't know if new users get a different "Ask a question" page than I do, so I can't check if they are getting a hint about how to use or not use images there. I don't see one when asking a question.

Is there any mechanism in place that is supposed to educate new users about this topic, or is the only option that more experienced users do this in comments?

This is document in the help center where How do I ask a good question? says:

Most users don't read the help documents or meta questions before they post. The best thing you can do is use a kind and constructive comment asking them to fix the problem. I currently use the following (intentionally formatted as code so that it can be copied and pasted).

Please [edit] to paste the text used in the image into your question so that it can be read on all devices, quoted, edited, and found through search. As it stands now, [your image makes it hard to answer your question or for people with related issues to find your question](//meta.stackoverflow.com/questions/285551/why-not-upload-images-of-code-errors-when-asking-a-question). See the [formatting documentation](/editing-help) for tips to make your text appear nicely without resorting to images.

Please [edit] to paste the text used in the image into your answer so that it can be read on all devices, edited, copied as text, and found through search. As it stands now, your image makes it hard to view and use your answer. See the [formatting documentation](/editing-help) for tips to make your text appear nicely without resorting to images.

Relevant self-promotion: I created a user script to insert pre-written comments. It comes with these two and many others.

Everything you said is true, but it's actually worse than that: some of the features intended to improve question quality are actually causing users to post images of code.

I've had at least one user object that they can't paste the code into the question because the system tells them it's too much code. So they post it as screenshots or links instead, because the system doesn't stop them from posting those.

Perhaps the system should more prominently suggest, on the Ask page, that images should not be used for text.

For the sake of science, I just created a new account (lucky I have a work mail ;)). When asking a new question the modal shown is: 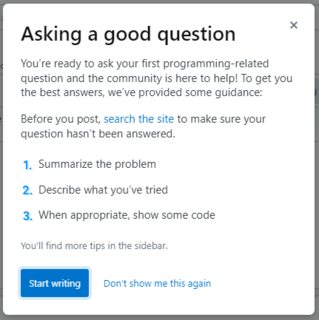 Which only says "When appropriate, show some code", but doesn't say anything about it not being in images.

Then, when trying to post an image of code, you'll get:

Which is nice and all, but nothing really stopped me from actually posting the image... Not only that, but it even says "If you post images of code or error messages,..." as if it is OK to do so... What's even worse, because of the low rep, the system doesn't allow to post inline images so it posts it just as a link. So now not only we have a useless image of code, it is not even visible on the page...

And now to also advocate the devil just a bit - the system does refer to other pages explaining this in more detail. Regardless of rep, the right sidebar (with some options expanded) is: 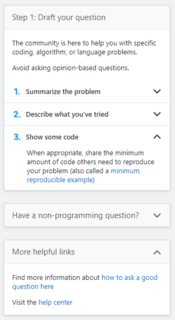 And both links for "minimal reproducible example" and "how to ask a good question" have some form of:

DO NOT post images of code, data, error messages, etc. - copy or type the text into the question.

But it would probably be a good idea if the respective bullets would also link to the canonical Why not upload images of code/errors when asking a question? (or even better, have that link right in the yellow warning above, given when trying to post an image).

Where are new users supposed to learn that they should show code and error messages as text, not as images?

From their parents as children, also known as common sense.

And so on, you get the idea. The source of their problem is not related to this site or even programming, but a lack of common sense. We can't fix users and no amount of help files provided will do so either.

"Stack Overflow is for professional and enthusiast programmers". There is a minimum of understanding one should assume from this. Prominently, that includes that code is a form of text and should be presented as such.

Presenting code as images is one of several indicators that perhaps a question shouldn't be asked in the first place.1 Let's not just carry such questions over the finish line for publishing.

1 If they are asked anyway, link to the [ask] help page. Among explaining the "DO NOT post images" guideline, it also addresses other frequent issues of these kinds of questions.

I think new users may have troubles with inserting their code as text (as just plainly copy pasted code looks awful) so they may think it's better to include their code as a screenshot so answerers can see all "original" formatting (and IDE syntax highlight) for their code.

I would propose that users posting a screenshot of code is useful, as it gives a clear indication that the user is unfit to be on SO as they are lacking the common sense to know that textual data should be represented as, well, text. It's probably futile to try to further extend the "ask question" guidance with an appropriate message, as the offending users already ignored the message that's shown when uploading an image.

In an ideal world, there would just be a close reason "image of code" which triggers an automatic suspension after the question has been closed as such. But SO leadership (kind of a misnomer at this point) would probably rather make us coddle the offending users than enforce any quality control, so meaningful repercussions are a pipe dream. Thus all we can do is downvote and closevote any offending questions. Or if you're feeling especially generous, answer any questions that contain pictures of code with pictures of a solution.

729
How much research effort is expected of Stack Overflow users?
170
Why should I not upload images of code/data/errors?
136
Feature Test: Ask Wizard for New Users (trial has completed)
89
Should we display a warning when users include images?
24
Should we edit a question to transcribe code from an image to text?
139
Raise the amount of reputation needed to stop seeing the warning on the image upload dialog
13
Audit that doesn't have full error message as text
33
Feature request: images / links to images of code warning for new / low rep users
5
The "How to Answer" section should include a "DO NOT post images of code" warning just like the "How to Ask" section does

2
Replace how-to-ask page for new users, with the tour page
4
Why may new users ask questions without having gained the informed badge?
213
Can we make it more obvious to new users that downvotes on the main site are not insults and in fact can help them help themselves?
59
Enabling easier elimination of posts by new users that disregard documentation
60
Why new users don't read the Help Center and what we can do about it