Could: "Possible duplicate of.." be given prominence for answering users?

Other than the link in the comments, users that answer are not directed in any prominent way to the dupe target and often prefer to just continue and answer.

Could users that answer be given a duplicate preview before they answer when a close vote exists?

Implementation-wise, this would require some changes to alert users that are about to answer. My initial thoughts were as @NathanTuggy suggested in the comments:

The implementation could use the same logic and UI as adding a second answer to a question: answer box is hidden behind a button saying "Add Another Answer" which pops up a confirmation dialog before allowing any typing.

Other suggestions: here and here 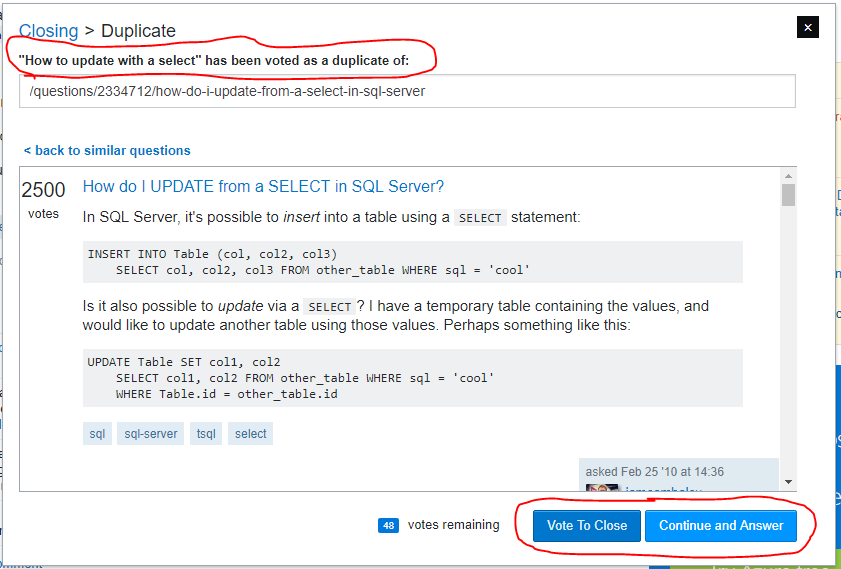 It would require some logic around if you start posting an answer before the close vote comes in, but for users that navigate to the page after the close vote, they could be shown any dupe targets before they can answer.

This wouldn't prevent answers and I don't think one dialog and click is too much of a barrier to answering in the situation where a vote exists.

You need 15 rep to flag and 3K to actually VTC, which would have to be accounted for.

Give more attention to user-identified duplicates

Both relate to posting duplicates as answers, as opposed to showing them in a dialog to people that are about to answer, in the same way users that close vote see existing close targets.

How much research effort is expected of answerers?

Similar requests (posted as answers to other questions) by @gnat

5
Answering "borderline duplicate" questions
7
Is it my duty to check for duplicate questions before answering?
27
Confusing duplicate target for Java Boolean default value
13
Why was this post marked as duplicate by the asker (who does not have close privilege) AND Community?
16
Allowing user to see all the dupes that have been marked as duplicate of a given SO post