How can this happen:

I thought that new users were throttled with asking no more questions than one within 90 minutes?

As @gnat stated in comments:

since all the garbage they dumped is deleted now, here's user profile to help moderators and SO developers investigate this bug: MBall

Sorry about that. I'd hoped the other rate-limits we'd built in over the past couple of years would pick up the slack here, but... That didn't quite happen.

Here's a handy graph of users who hit the new-user asking limit per week, by week: 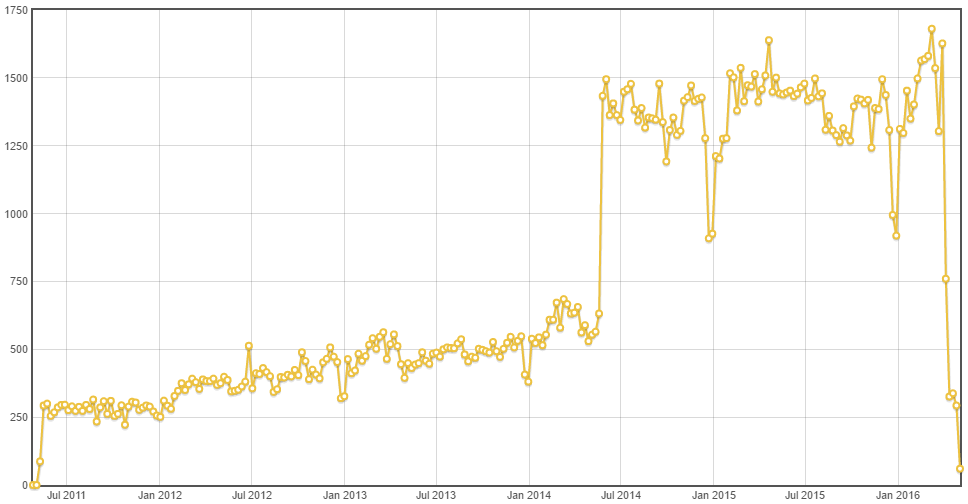 And here's a corresponding graph of users who hit the question-block, just so you can see that there's no real slack-picking-up happening here: 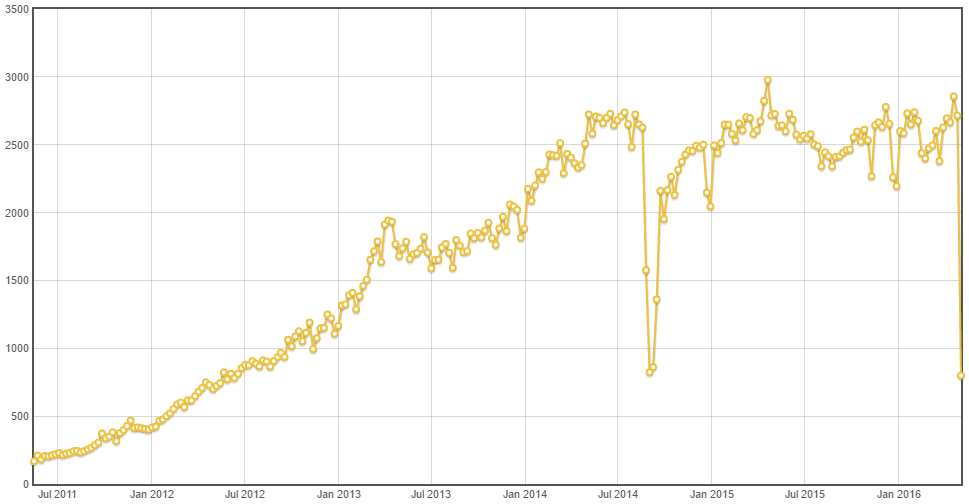 I've put in a change request to restore the ability to customize this limit network wide; if all goes well, that'll be available again in another couple of weeks.

Until then, here's what I'm gonna try:

Why 40 instead of 90 or at least 60? Because there's no ability to customize this per-site right now, and because this applies to all new users from a given IP, this may be very painful for small or niche sites. I picked 40 because 75% of questions scoring <0 asked in the past 30 days got their first downvote within 39 minutes, so this should allow the rolling rate-limits to kick in for most users without requiring per-site overrides.

Of course, anyone caught circumventing either of these restrictions will still have their account and questions unceremoniously deleted and their network blocked from asking further questions for a generous period of time.

Sorry again for not catching this sooner; please let me know if you notice any odd unintended consequences here.

10
90-minute question wait enforced between sites
7
Do new users get temporary additional restrictions if their first question is heavily downvoted and/or closed?
23
How did this user bypass the question rate limit?
-10
Must wait 40 minutes between asking questions (But first question was deleted)
342
Should Stack Overflow be more restrictive about new user registrations?
158
How to lure professionals to Stack Overflow?
255
Error -- "you can only post once every 90 minutes" but I haven't posted in days
221
Voting rings - how to handle organized groups upvoting each other?
38
Is Stack Overflow losing its shine?
29
Questions are now rate-limited to 1 per 90 minutes?
See more linked questions

4
Editing undeleted answer on the cusp of 5 minutes creates new answer
115
Does banning relatively new users encourage alternative accounts?
121
Allow post-banned users to see all of their posts, including the old deleted ones
13
In what circumstances does Community User protect a question to prevent "thanks!", "me too!", or spam answers by new users?
51
The advice shown to all new users asking questions should be useful
16
"Is this answer outdated" shows on new answers to old questions
78
Ask Wizard for New Users Feature Test is complete