I'm getting really, really tired of filtering through the garbage... any tips?

I've been trying to answer questions as best as I can. I admit, I want the rep, but I always try to make my answers as high-quality as possible. I'm here to try and help people who deserve help, not gain imaginary internet points.

That said, I've mostly found questions to answer through one strategy: sitting on a list of tags. This works, but it is more of a chore than anything. There are a number of problems with my current method:

I don't answer that many questions, and I only have 170 answers at the time of this writing, but currently my second-highest voted answer is a painfully obvious Java one-liner, while my elaborate answer with multiple solutions and two JSFiddle examples has less than half the votes.

I'm not trying to turn this into a generic "woe is me, I deserve more rep" post, but I'm trying to make one thing clear: I am starting to get really frustrated with participating on Stack Overflow. I know the "recommended" homepage is supposed to help with this, but it hasn't thus far, and I can't imagine it will ever get all that effective. I'd love to be proven wrong, but I suppose I'm cynical.

So. That was more of a rant than anything else, but my question still stands: what are the current best strategies to finding good questions to answer that best mitigate the problems described above? Is the system just broken beyond all repair? I hope not, because SO has managed to almost singlehandedly change the way programming problems are handled on the internet, but I'm worried that I'm not alone in getting fed up with this onslaught of worthless, low-quality posts. If we don't figure out a better way to get good questions in the hands of good answerers (and adequately reward both parties), this site will continue to decay.

There is a viable—and, I think, non-malicious—strategy for getting rep points while still writing good answers, which I stumbled onto by accident.

I tend to write iteratively—start off with just the key points, then add in examples and explanations until it's way too long, then try to trim things back. And I like to commit often.*

So, as a consequence, I often write one of the first decent-but-not-great answers, getting the FGTW rep, but then my final version is (I hope) pretty solid, also getting me good-answer rep. It took me a few months to notice the effect, but after I started to pay attention, and did a few experiments (just waiting on my first commit), I'm pretty sure it's real.**

As an even more important consequence, the early commits mean I often discover that someone else has written a really good answer before I've put in too much work, so I can just delete my answer (unless I think I have something important to add) and not waste any more time.

I don't think this hurts anything. In fact, I think it helps. As long as I finish up the good answer I intended, that's the most important thing. If my eventually-good answer takes potential votes away from a half-assed answer that's never going to be expanded beyond a one-liner, that's not a bad thing either. And the fact that I sometimes get to abandon answering early and creating two competing answers that don't add anything to each other… well, maybe that's just neutral, but it's not bad.

* In case it isn't obvious why: I hate when I accidentally delete something important, or go into a tunnel or run out of time when I'm halfway through revising something.

** I suppose if I did a more scientific study and discovered that I was getting a lot more FGTW rep than good-answer rep I'd be a bit disappointed… but the beauty is that I don't actually know, so I don't have to be disappointed. :)

The problem with the more popular tags is they are saturated with both lots of questions and followers, therefore the ratio of questions that you can answer is far lower than if you select a few less popular tags.

I've found it more rewarding picking a tag that sometimes only gets a few questions per hour, but the quality is usually higher and there are less people actively answering so you don't have to worry about Quick Draw McGraw: 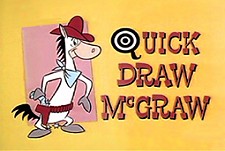 Use the Advanced Search

If you have a read of this page, there are numerous queries you can use to try to find higher quality questions that need an answer. For example, you might want to look for:

Questions asked today, in your tags, that aren't closed, with no answers and a positive score

I recently asked this question to try to expose the advanced search functionality.

I also created a demo of the advanced search, which I have been using to find questions to answer:

I struggle with the same thing, because I really enjoy putting in some effort and providing what I feel is a good answer. I like sharing my knowledge and experience.

Unfortunately, I have come to the conclusion that you have to accept the fastest gun in the west problems ... everyone knows the way it works, it's just a fact. If the question is not really genuinely hard, but just requires some knowledge, someone faster will beat you to it. Heaps of people have the same knowledge and experience, and can likely answer faster.

So then you have to go looking at older and bounty questions. These unfortunately are on the other side of the curve usually: they are -really- hard, and specialised. Old not-bounty questions aren't worth answering because the original poster won't accept the answer and rarely will people upvote it.

One thing I will say is that I don't think the volume of bad questions plays into this. They don't really make finding questions to answer harder. And there is reward (rep) in cleaning them up. I do wish that there was some disincentive for answering bad questions, so that bad questions are more discouraged, but that's a different topic.

YOLO: give up and find something more entertaining to do with your life. There's no need to continue using SO if it's just going to make you fret about most of the questions being rubbish. That's pretty much my policy nowadays, though the occasional gem does still appear.

Your question is about two different things, and they aren't particularly related.

What I normally do is the following search query and then sort by "newest":

Here, an example for jQuery. See How do I search?

Also, I had some browser snippets to remove negatively voted questions from a page:

Now, as I've been playing with userscripts, I built a small plugin to fine tune this kind of removal and just posted it at Stack Apps (Chrome only). The sliders will hide questions in real time: 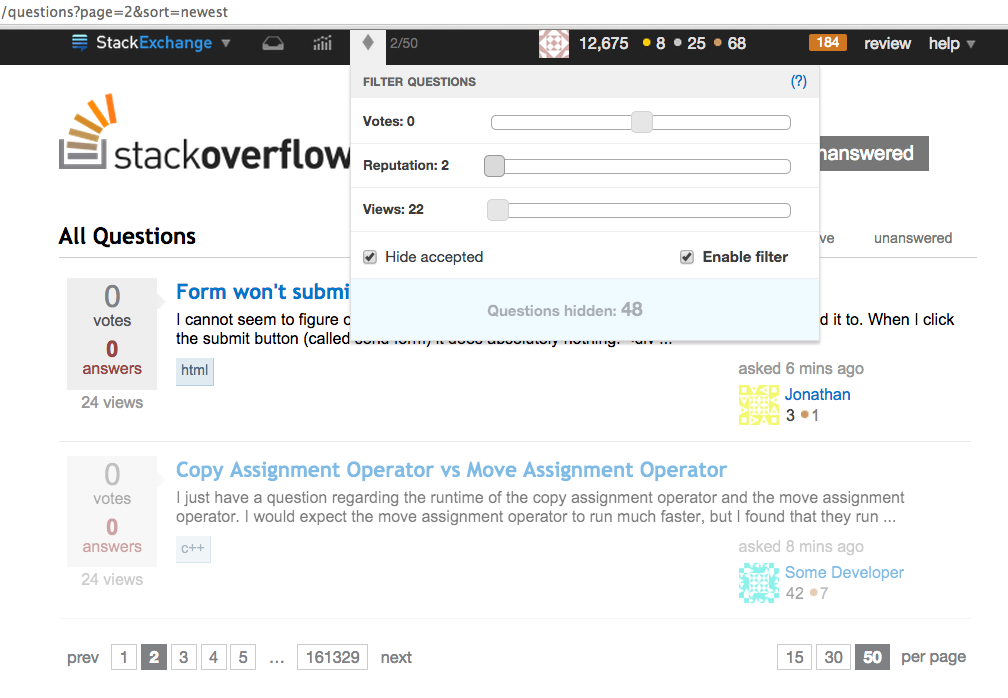 I like answering old questions, or posting self-Q&As. I can take as much time without rushing, in hopes of other users who camp the "Active" tag will see my (possibly high quality, hard-worked and excellent) answer and upvote it. I don't like rushing answers or answering poor questions, and it's too much work for me to hunt the tabs waiting for a good question to appear.

On the other hand, sitting on the tabs are boring. I used to do that, but I almost stabbed myself when someone posts an exact same solution, with less explanation than mine, and I'm forced to abort my answer half-complete knowing the next group of users doing the same are probably suffering too. Soon the existing answer gets a few upvotes (proving my point) and a short discussion expands in the comments, including the explanation somewhere down the comment thread. It's hard to complain about the answer now that the explanation is somewhere, yet there's nothing interesting to add anymore.

Possibly the only person capable of providing answers of non-mediocre quality quickly would be Jon Skeet. But my skills are no where near his, so I find myself away from the tab camping.

Or, another thing you could do is to encourage OP to improve his question. If you feel that you may have an alternate solution which works, you could try leaving a comment. If other users or the OP himself finds it useful (possibly along the lines of @Alexis That's a good idea for this use case.) you could expand it into an answer, and address the question so it's relevant and useful. (And upvote-worthy.)

Bounty questions can be a good place to look for, too. Questions in the featured tab could be citing for updated information or attention to the question. This could mean that the questions has obsolete solutions (and yours may stand a chance for bounty reward and upvotes if it's helpful) or are currently not received enough attention (possibly all current answers are unhelpful and need yours :) ). They are a good place to look for technologies that you may have attempted and could shed a light. Even if it's not entirely the best solutions, if it's helpful, the bounty on the question would feature it, making the question more visible for users to browse and possibly review your answer so you get votes (both up and down) more actively.

I personally dislike the approach of posting, and editing aforehand. It's not a good practice, leaves a scratchy "Edited \w+ ago" signature, and bumps the thread.

Downvoting poor questions you come upon would be helpful for other users doing the same too, trying to find, attempt, answer, or help out new questions. Negative score is a strong indicator that the question does not show research effort; is unclear or not useful. By voting appropriately, you would not only be earning reputation, but helping others to earn reputation by answering the good questions as well.

41
How can I find questions on what I am good at?
4
How do I not get frustrated when an inferior answer gets accepted?
143
A SWAT team of nice II: temporarily show new questions only to designated "guide" users, allowing for fixing problems
83
What makes a spectacular answer?
52
Is there a kind of "exponential upvoting effect" for high rep users?
-4
Why are people so fast hitting the downvote or close button on certain questions?
55
Stack Overflow / Stack Exchange - Advanced Search

180
Why the backlash against poor questions?
6
What if two answers with same content are given at almost the same time?
9
No one should get rep for asking or answering "typo" questions like this!
87
What can we do about fastest gun in the west answers that dump out garbage, and then plagiarize existing duplicates?
15
Should I comment or answer?
19
What are the dynamics of the Stack Overflow community?