The box I'm typing in right now, on my iPhone 11 mini, seems to be 36 characters wide before it wraps. That's less than half the width of a 1970s punch card; I think it's fair to say writing code into 36 characters is hard work.

The top line of code in the image below is a fairly-reasonable-these-days single statement that has wrapped onto three(!) lines. The next line down (highlighted), I'm trying to indent: 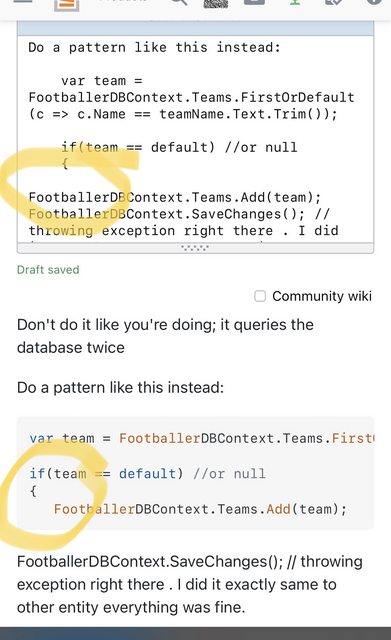 but on an iPhone the cursor jumps to the start of the next line when the words do, and because spaces are invisible I've lost all visual reference of how many spaces indent have been applied.

I would count every time I hit the space bar, but I'm not always indenting from 0 if I'm reindenting code pasted in, and I can't count the chars I can't see. This means I either erase the existing indent back to 0 and reindent by counting...

...or I have to scroll up and down the answer to look at the preview, try and work out how many spaces to add and then add them (I can't add them just by pressing space while the page is scrolled to the preview and watching the preview change because the page jumps back to show the caret as soon as a key is pressed)

Scrolling to see the preview isn't so easy when the text area takes up the whole of the touchable viewport above the keyboard:

But all in none of this resolves the problem that writing code into a box that wraps at 36, in this day and age, just doesn't work; I implore your developers to use the new UI on an iPhone 11 mini or similarly sized cell and see what a poor experience it is

I appreciate that I get 67 characters per line if I pull down the control center, and turn off portrait lock, flip the phone on its side, but then I have to try and scroll a text area that is just five lines high with the keyboard open. I also cannot grab too near the top of the screen otherwise I'm opening the control center again. I don't work with the phone in landscape because of that basic usability problem; there's just not enough area above the keyboard so I'd like to carry on using portrait. The old mobile site was better, because the text area held maybe three times more text (smaller proportional font).

As to solutions, how about

Even better, how about giving me the choice what font and size and wrap and pilcrow I use? All my other code editors do...

Oleg's noted that the editor is set to change again at some point - I hope it doesn't exacerbate the problem. On many of the sites I use to check my code works (.NET Fiddle, db fiddle, etc.) the editors are very intelligent, and sometimes unusable on a mobile - copy paste doesn't work, or is really tricky - auto completers often have usability issues, etc. Quite often I find myself wanting just a plain old textbox. It'd be a shame if incoming editor "improvements" make for more difficulty on a mobile device, but I feel that the plight of mobile users isn't raised much because there's an automatic expectation that everyone on SO uses a computer.

Unfortunately, I don't think there's a real solution to this problem. You made some specific suggestions, but I don't think those will help (based on my own experience posting from mobile devices).

When confronted with a frustrating UI, many users tend to reach for the argument that they should be given a choice, but this doesn't address the core issue.

We don't need more settings for more individual use-cases that can't all be supported equally. That'll just lead to more layout issues. SO's editor isn't an IDE, it's a tool to format your post. Ideally, you'd be copying your code, pre-formatted, from an IDE.

In the end, a mobile device really isn't suitable to write significant code blocks. The experience is always going to be sub-optimal, and I think we should match our expectations with the physical limitations of the device.

I had a look around at other sites on my cell:

Use this one a lot to check the code I write; it can be a bit awkward to select code in it for copy-out which is why I tend to write the code into SO and paste it into .NF. Panning round the non wrapping code isn't something I notice as being unduly awkward - I do it on most web content most of the time 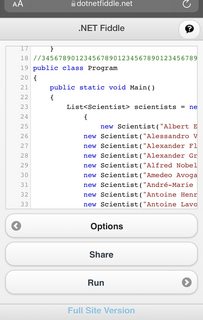 A site that shows the results of decompiling code compiled from what is written, to get a handle on what is syntactic sugar/compiler generated. Not so useful for running code but handy for "does it compile" 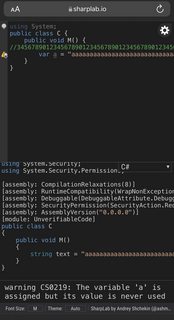 Doesn't appear to make any responsive layout changes at all; it's way too small to be usable without zooming in but when zoomed my ancient eyes don't have any complaints about the text size 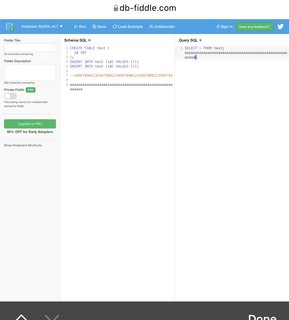 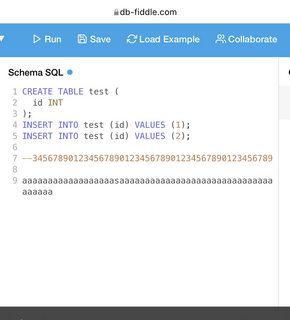 Perhaps the most irritating editor for mobile becuase it has a fly out widget that appears on the right of the box over the line where the caret is. This box holds operations like select all, copy, paste that most normal code-enabled people would do another way. They don't even work on some of my mobile devices and the widget makes placing the cursor on a line end impossible if the line is over 35 chars.

If I was giving an example to SO of "how not to design a new editor", this would be it 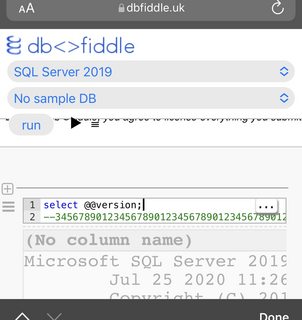 View mode shows 33 chars but there's that huge vote margin that edit mode doesn't have - certainly it could fit more than 36 so view model font must be smaller than edit mode's. 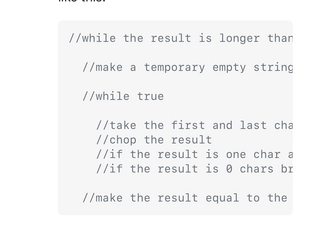 I do still have a picture of this one somewhere, I think in an answer I made on a thread about the incoming UI - I'll see if I can find it

I fully appreciate that these are mostly code-only sites, whereas SO's edit box isn't always code only

Every site I looked at manages more chars than SO and though my vision ain't 20/20 I don't feel like the font is too small on any of them. As such I think we could survive having the size tweaked down slightly.

Significantly though, most sites I looked at don't wrap the code and I don't have any major usability complaints panning around those codes. Significantly, SO's View Mode doesn't wrap its code blocks - we have to pan around those to read them on a mobile.

I wouldn't advocate turning off wrap though because it only really benefits code and a lot of the content posted on SO is not code. In an ideal world I suppose the editor would be partly wysiwyg, like view mode is: non code blocks are proportional wrap and code blocks are monospace nowrap. I'll throw that suggestion in for a replacement editor

But right now for posting on mobile I feel small screens would benefit most from a toggle button above the editor that turns wrap on and off so the author can decide on its state depending on whether they're writing prose or code. Default would be on so there is no change to the current behavior, and I don't care that the setting is remembered - I'm happy for it to always start out as On

It's not perfect, and it's not even going to make things as usable as the old editor was on the mobile site, but I don't think we'll ever see a reversion to that so for me it feels like it's the single best-of-bad-bunch, easiest-to-implement option that would mean the current editor isn't so awkward on small screens