Sometimes very aggressive users keep posting offending comments for quite a long time before they are suspended or banned.

IMO if the system receives a series of abuse flags - it should automatically suspend the user and then the moderator should review it. It will simply stop the ongoing abuse.

Example from today. Only my flags. From the comment, I know that another user was flagging them as well. 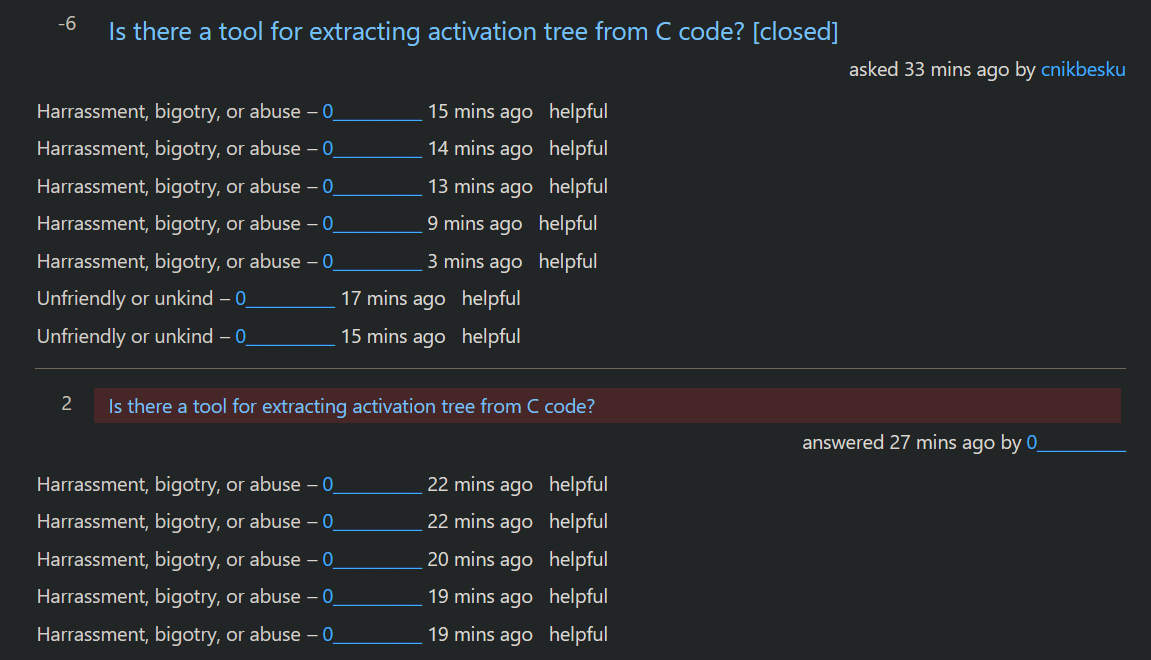 This is a problem. We do get some unreasonable users going berserk every once in a while, and to this day, the only way to put a plug on such a rampage is for a moderator to apply a suspension. This isn't the first, and it won't be the last. At best, a mechanism to throttle the posting of comments once enough of that user's comments are deleted in a short time span would at least prevent further harm on the spot without being too invasive. After all, comments are second class citizens.

Hey, here's something that could work even better! Bring more moderators!

Ensuring that at least one moderator is online at any time of the day may seem utopic, but at least they don't depend on dubious algorithms, and they'd get to these problems in much less than an hour.

But hey, here's something that could work even better! Set people's expectations right!

The way that the company is advertising Stack Overflow continues to attract folks with some sense of entitlement over their own questions and answers. Sometimes even, anything less than giving them what they want is perceived as an insult. Should the platform be much more upfront that they aren't here just to get free help and that their posts will be subjected to scrutiny for long term value, we could prevent cases of persistent offensiveness from ever happening.

Sometimes very aggressive users keep posting offending comments for quite a long time before they are suspended or banned.

Well, it's just words. Report them and move on.

So I would rather have a few swear words standing until a moderator sees them, compared to people being locked out of their accounts without a reason other than they got voted off by people flagging their comments. There is a reason we have rules and moderators and not just "mob rule". Mob rule isn't cool. And a few f-bombs is something I'm willing to take to keep us from being ruled by a group of happy trigger fingers instead of rules and elected and accountable moderators.

832
How do the moderator resignations affect me and the community?
99
To what extent does language need to be moderated?

105
Allow room owners to suspend users from a chat room
12
Oversensitivity and Glitches in Automatic Posting Ban
55
Transparency request: why was this user suspended for posting two (now deleted) questions to meta?
16
What can we do to police abuse when moderators are unavailable?
59
Is there no automatic throttling or banning of users who repeatedly post profane comments?