If we find a plagiarized answer, should we first post a comment saying that this is plagiarized from ____?

I had recently posted this question. After about 2 hours of posting that question, I suddenly received an answer from a new user. That answer was the user's first post.

By just glancing through the post, I realized that this had been plagiarized from the Wikipedia page of XOR Linked List. Before custom flagging it, I posted a comment:

To my surprise, the user was on the website and on seeing my comment they deleted the answer. As I am < 10k, I cannot view the answer currently.

I know that for plagiarizing a post completely from a link, and not putting any of its own efforts, and not mentioning from where the content has been taken, you get a suspension. I know this because one of my friend got suspended for 30 days on SO, because of plagiarism.

Now, I can't remember who the user was, and thus cannot track him. But who knows how many plagiarized posts he has posted? He should have been suspended for plagiarism. But because of posting that comment, the user escaped. But as per me, whenever you flag a post, which is clearly off-topic, rude etc. you should post a comment communicating to the author.

I now know that I shouldn't have posted a comment, but I thought that the user was new and did not know SO Plagiarism Policy. But as I wasn't sure, if the user would improve his answer, I even went to flagging it. I posted the comment, because even this answer says to comment if you think the user posted in good faith (which I thought):

Now let's get to the point. Many new users do not know the policies of SO. They just think that this is another Q & A forum (which are very different from SO). He has to get suspended, but not if he changes his answer. And how will he know the plagiarism policy? Only if we communicate to him.

I tried to communicate to him, and delete it if he doesn't change his answer, but this didn't work. Instead, he just escaped from suspension.

So in such a case, should I post a comment and flag it? Or just flag it?

Here's the answer, in which I posted a comment. I even downvoted it (you can't see the downvote, as this screenshot hasn't been taken from me): 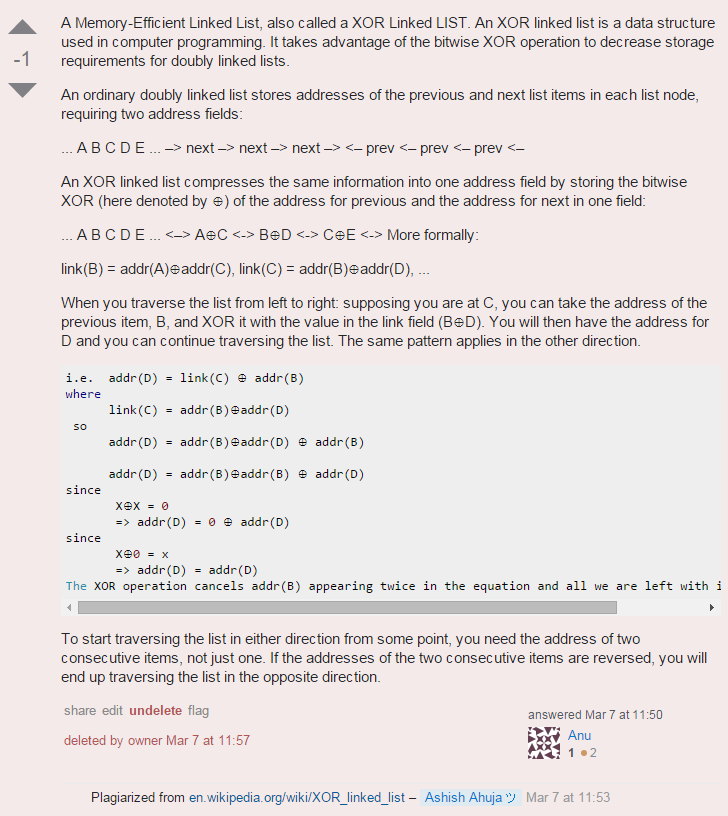 Please feel free to post a comment with a link to the original source, along with flagging, if you believe an answer was plagiarized. This way anyone else who sees the answer will know that it was plagiarized. We tend to leave these comments as well prior to deleting the answers, so by leaving a comment you save us the trouble of doing that.

Of course, if the answer turns out not to be plagiarized, we will do nothing instead, and any comments alleging plagiarism will be harmlessly removed.

If the answer is very likely plagiarized from the link, as BoltClock's answer states, commenting allows everyone to see by themselves (including the moderators)

Now (and that's the reason I'm adding another answer):

And last but not least:

If you're sure that it's plagiarism and the answer has a positive score > 2, make sure to downvote the answer

69
How do we deal with plagiarized answers?
40
Is this copied answer going to remain 0 scored and visible?
-1
When does the system automatically reverse a vote?

55
Transparency request: why was this user suspended for posting two (now deleted) questions to meta?
33
Should this be an answer or a comment?
23
Why was this flag declined for plagiarized answer?
5
Can an answer which was deleted due to presence of plagiarized parts from Mozilla & several SO answers be undeleted if plagiarized parts are removed?
17
Is an answer still considered plagiarized from another source if the only thing different is renamed variables?
53
Post incorrect answer first, copy correct solution from another answer later, get bounty!