I saw this question in triage today. After reading initial lines, It appeared to be spam (Discussing his website with details of its services in a promotive narrative). So I flagged it as spam. After a while, I realized my mistake and flagged it as off-topic because the guy was asking for recommendations about web-hosting service.

So, Off-topic flag was regarded as helpful while the spam flag was disputed (even though it should have been declined imo). It is shown below:

Now when I opened my helpful flags page, I could see off-topic flag was there:

But when I opened my disputed flags list, the spam flag was not there. 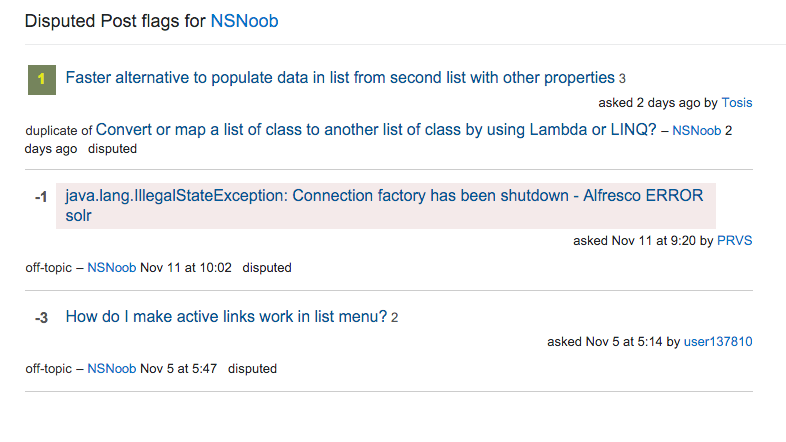 TLDR for multiple flags raised for one question, if one flag was helpful and other one wasn't, the second flag does not show up in its respective category.

Is this a bug?

This isn't a bug. Ignoring comments there are three groups that can have flags disputed:

Each of these has its own distinct helpful/disputed/declined breakdown - so make sure you're choosing the status for the right flag type when checking your history.

Not the answer you're looking for? Browse other questions tagged bug status-bydesign flags disputed-flags helpful-flags .

26
Proper reaction to disputed/declined flags
32
Are raised flags during triage disputed if others disagree?
50
What to do about my disputed flags?
16
Disputed flags & questions closed for the same reason
28
Retracted flag was changed to disputed?
23
If a flag is disputed, can we display how other reviewers flagged?
8
Spam flags disputed