This is to address cases of raised flags in triage that get disputed automatically and the question end up being closed or placed on hold for the same reason (or similar).

One of my own examples: https://stackoverflow.com/review/triage/8655245

Where the flag was disputed:

And the question itself was later re-flagged for the same reason: 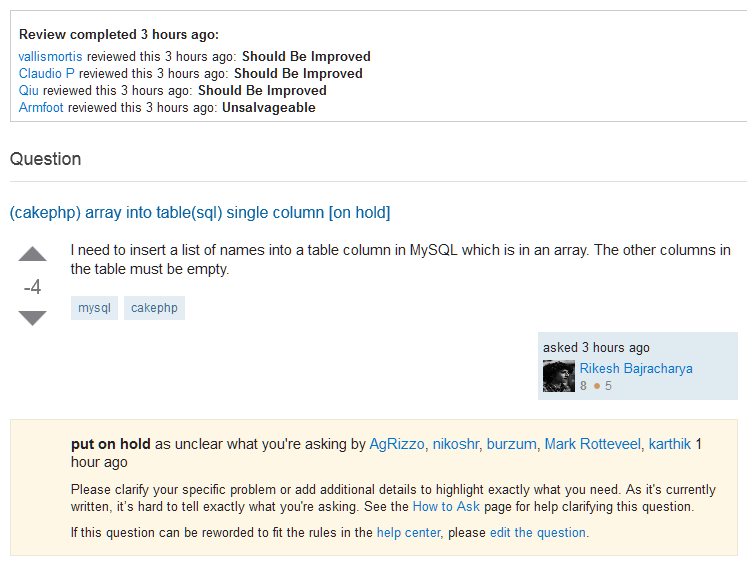 It seems this is a recurring problem:

If the dispute is done automatically through triage, wouldn't it be more viable to show the raised flags before a person chooses an option in triage? Or perhaps just a simple count with the raised flags?

If this may influence the person to raise flags in triage, it may actually be the best option in the end:

Another way to encourage people to use flags in triage (without a flags preview in it), would be to update a disputed flag to helpful (even if the reason does not match exactly).

If this is not feasible, when the question is closed, a recheck of previous flags in triage could be made automatically in order to include the username in the list.

I don't think it's a good idea to show the flags which have already been raised. This will bias the reviewers towards raising the same flag without much consideration. You basically give people the choice of:

I believe the way to go is: Auto-convert disputed flags when they prove to be correct

145
Please rename the "Should be improved" button
36
Re-flag aged away flags with the same flag reason
32
Are raised flags during triage disputed if others disagree?
120
Auto-convert disputed flags when they prove to be correct
16
Duplicate flag disputed, yet question closed as duplicate
37
What should I do when my flag for a clearly bad question gets disputed?
2
Disputed flag on closed question for same reason

32
Are raised flags during triage disputed if others disagree?
37
What should I do when my flag for a clearly bad question gets disputed?
30
Is there any way I can see a reason why my flag was disputed
50
What to do about my disputed flags?
11
Bug in showing disputed flags
18
When are flags disputed, and when are they declined by review?