If a flag is disputed, can we display how other reviewers flagged?

Having recently gained the reputation to access the review queues (yay!) I've had a few disputed flags.

Firstly, thank you for doing your part and reviewing! It's users like you who curate the content on Stack Overflow, keeping it as invaluable a resource for programmers as it is!

Secondly, I see that yivi has given you the answer to your initial question in the comment:

You can go back to your history for, say the First Posts review queue by going to the history link on the review page:

then you can find the specific review corresponding to the disputed flag.

You can also see your reviews by going to Activity\All Actions\reviews on your profile page (for you it's here), but once you get more reputation and access to more review queues, you'll find that not review queue actions appear there.

I know you've tagged this as a feature-request, but until the feature gets added I'lll show you another way to find out information about your flags. This will work even on posts that you didn't flag from review.

I'll work through an example for a disputed off-topic flag of my own (it's from 2015 because once I got 3k reputation I lost the ability to flag posts for closure and instead was able to cast close and reopen votes) on this question:

If I hover over the "disputed" then I can see exactly when the flag became disputed:

It's possible to see the timeline (an experimental feature of the site) of any post by right-clicking on the "edit" link at the bottom, copying the URL to the clipboard, and changing the /edit to /timeline.

In this case I'm changing

The second link then shows the timeline for that post: 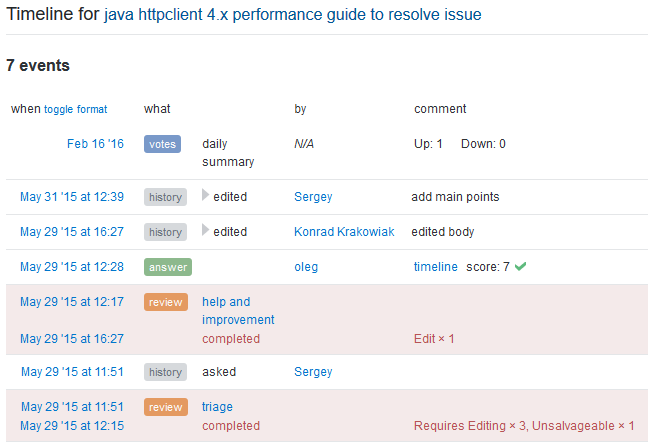 The question was posted at May 29 '15 at 11:51 and immediately entered triage. The result of the triage was:

Nobody agreed with me, so my off-topic flag was disputed when the review was completed at 12:15.

28
Why is there no link to timeline of the post?
31
"Recommend Deletion" not shown on "all actions" tab