Why can't I vote for my "own" community-wiki answer when "explicit ownership" has been removed?

I made an answer to one of my questions as community-wiki because the solution has been provided in a comment and I didn't want to gain any reputation that I didn't deserve.

So I ticked the community-wiki checkbox and have been provided with the following warning... 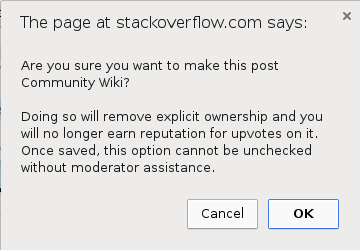 ...where it clearly states that "doing so will remove explicit ownership [of the post]".

Therefore, I thought I might be able to up-vote it because "explicit ownership has been removed". But when I tried, I have been provided with the usual message saying that I can't vote for my own post:

I understand that I cannot do so when it's not a community-wiki answer because I'd be able to gain rep all by myself but it is not the case here.

Why the reason I cannot vote for this post (where "explicit ownership has been removed") is because it is my own post?

Isn't it a little bit contradictory?

Because CW has never had a consistent meaning.

It doesn't really mean "the community owns it". It seems like it ought to, but I've verified* that the original poster

And if I'm not mistaken** the original owner can also still

None of this is consistent with the idea that it's owned by the community. The community can borrow it when they come over to visit, is all.

CW is a semantic glitch in SO's tidy design, a hack that sort of mostly works, and it's tolerated because it (more or less) fills a real need. But its meaning, in practice, is a jumble of "make it easier for others to mess with, but not too easy", "rep-denial!", and "not really a real post" — even after tweaks have been applied and outreach attempted over the years to reduce those negative aspects of its definition.

There are a few feature requests to improve on that (including one of my own), but I'm not aware of any company plans to improve it in the foreseeable future.

In this particular case, a consistently community-oriented feature probably would allow you to upvote, for one main reason: if the community as a whole is maintaining it, your personal approval of it now hinges on how good a job they're doing, since you're not solely responsible for keeping things in line. The fact that this is not permitted is a very good sign that no, the original poster, when push comes to shove, is the one that ultimately should take responsibility for everything there.

Not the answer you're looking for? Browse other questions tagged support voting community-wiki .

31
Should I be more lenient in approving suggested edits to community wikis?
14
What do the statistics for a community wiki represent?
18
Should I mark my answer as community wiki when I am posting in someone's name who does not have an account?