Yesterday I suffered at the hands of a disgruntled user, who took it upon himself to downvote a number of answers I've posted. It happens.

Today, the script the should sort this out has run, but it's reversed only some of the block of downvotes: 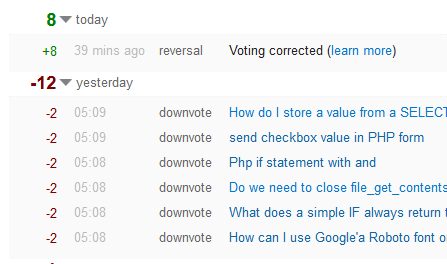 The four downvotes that have been reversed all occurred at 5:08. Those that occurred at 5:09 remain. We're only talking about 4 rep here, so I'm not going to lose sleep over this one occurrence. However, this seems to be common. On at least two prior occasions serial voting has not been reversed in its entirety.

Some will say that I can't know that all these downvotes were made by the same person. True, but the chances of two answers being downvoted by other users within a minute of a block downvote are, shall we say, vanishingly small.

Is this a problem in the script that could use some attention?

-15
Is there way to prevent serial voting?
3
Improving my answer after downvote

4
Does the serial voting script consider a question basis as well?
9
When does downvoting get “serial” enough to be worth reporting?
32
'Serial Downvotes Theory' and countermeasures
4
Why was my custom flag about serial downvoting declined?