Why was my custom flag about serial downvoting declined?

I recently raised a custom moderator flag about the flood of downvotes I am getting recently. While I had raised one before, the downvotes were reversed by the downvoter and replaced by upvotes, so I thought another user targeted me.

I wouldn't personally like to post the test in the custom flag, however, I will just sum up.

I mentioned that the downvoter downvoted 3 of my posts on Jun 12, but, this time, they did, with some 1 minute difference between each vote (total three). Also, I said that there were 2 more downvotes from Jun 11, which weren't reversed, possibly by the same downvoter, since the reversal script reversed up to 3 votes, as I have been told. At the end, I requested the case to be escalated to the CMs, since it was not the first nor the last time it happens (I admit I made a typo in the original flag text and wrote not and not nor, but I don't).

I was surprised because the moderator who declined the flag didn't leave a comment, but a canned reason, so, if my flag was declined correctly, what was wrong with it? Did a CM review it and found that there were actually two or more people that downvoted me?

I handled the flag.

Not all downvotes are reversed.

You have no record of permanent targeted serial downvoting on your account. Meaning no one person is targeting you excessively.

So the decline reason:

There's no need to raise a mod flag. Wait 24 hours for the reversal script to run. If we got a flag for everytime someone has two or three downvotes we'd be flooded. 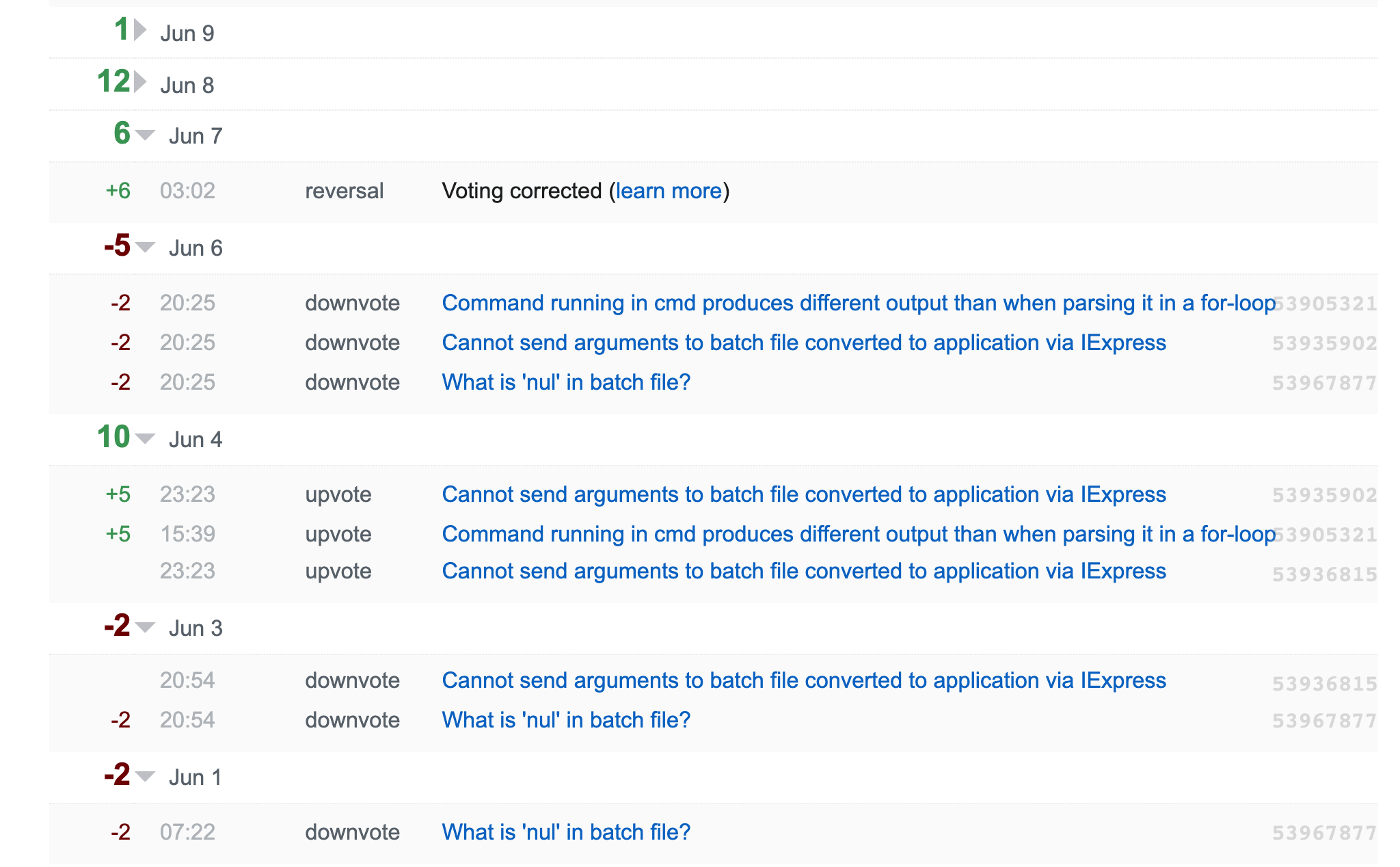 I'm not the mod who handled/dismissed the flag but I would have handled it the same way probably (or maybe marking as "helpful" with "sorry can't do more", to avoid getting you a flag decline for this).

The serial reversal script reverted the 3 downvotes above, but left the 2 downvotes from june 11th probably because there are not enough votes in a row to justify reversal even if the same user downvoted you in 9 seconds (which cannot be established right now)

now you had 3 downvotes again:

Which doesn't seem to have been reversed, maybe because the last vote was a bit later.

I didn't write the script or even know how it works, but I suppose that it first checks the downvoting times and discards the votes too far for one another. It only checks the ID of the person afterwards, probably because it's a costly/sensitive operation.

Now why the moderator declined your flag (or would have declined it) ?

The moderator probably estimated that:

Maybe the moderator didn't want to expose the investigation method too much, or didn't have time to answer with a non-canned response. But even if they responded, they could only have told you:

sorry, there's no evidence that the 2 remaining downvotes are from the same person

which is not a great improvement over:

Moreover, the less we provide details about the means we have to detect those fraudulent activities the more efficient we are (yes, security by obscurity, I know)

So if that continues, flag again. My personal experience:

We spend a lot of time trying to catch sock pupetteers / cheaters / serial voters. If the person keeps downvoting you, we'll catch that, and have all their votes against you invalidated by contacting the community managers with concrete information.

252
What can I do about getting a sudden flood of revenge downvotes?
12
Serial downvoting under the radar?