Was this question correctly closed as "needing of details and clarity"?

The question How to get text of image using Tesseract was closed for the needs of details and clarity.

However, from my point-of-view the question is clear.

Let me rephrase the question:

The question is related with image-processing and the characters can be extracted by applying pre-preprocessing technique.

I re-read the cast close and reopen votes and I don't understand why the question was closed. Maybe my point-of-view for the question may not be correct.

As the 1st close voter, here’s my side of the story. (I don't speak for the other close voter.)

For reference, here's a screenshot of the relevant part of the question's timeline:

I saw the question when it was posted as Revision 2 ("edited title"). It basically looked like this: 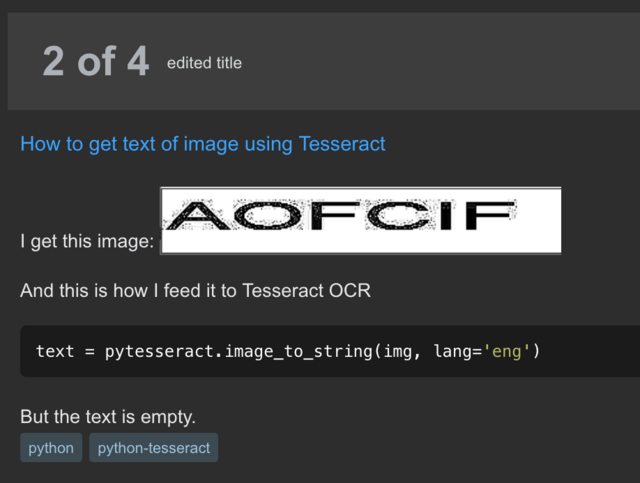 Notice that there weren't any details about the processing from the raw image to the passed img to Tesseract. Did they load the image properly? Did they do any pre-processing? If there was pre-processing, did they do it correctly? Maybe they messed up in how they loaded img, that's why Tesseract couldn't read the text. (In hindsight, closing as lacking a MCVE could also be used here).

You say that the question can be rephrased as "asking suggestions what to do?" and "The question is related with image-processing and the characters can be extracted by applying pre-preprocessing technique.". But, that isn't fine to me, because that's basically a "give me the codes" or a "give me a tutorial" type of question, and I don't like Stack Overflow becoming a place where people dump their input images so that people can write the OCR code for it.

I didn't VTC as "give me the codes" because to me it looked like they did something, but it's just not giving the correct result, and we can't help them fix it because we don't know what that something they did. (side note: in your answer, it could be great to explain what was wrong in their original code.)

Both of my actions were done before the OP edited it at 2021-01-27 11:25:21Z to what it looks like now. It was a mere ~30mins or so after my vote, but unfortunately, I already signed-off for the day (read: detached myself from my PC). That's dinner time here where I'm at, and I usually check on things I commented and voted on only on the next day. I would have probably retracted my vote or voted to reopened if I've seen it this morning. You could have also pinged me in the comment to ask me to retract/reopen.

Not to sound defensive, but in case someone argues that I could have commented first before VTC-ing or waited for a response:

From the question history it was "unclear" when closed - after editing in details and this question here it was then reopened.

At it's current state and after the latest edits it could be closed as "need debugging details" again (or/and may warrant a downvote for not enough research done):

Closevote again:
In it's current form the question does no longer shares the speckled input-image, there is no way to reproduce the problem which might lead to a "need debugging details" closing (and partly invalidates your answer).

The current version of the question has an IndentationError in it (which might be another reason for the currently 2 "needs debugging details" close votes). It might also be a sign of the OP posting code that is not really executed on his side - or it might be a copy/paste error (most probably cause).

Dupevote:
Providing an answer for a specific image in question might or might not have much worth for later users - does this question merit a specific "preprocessing steps" answer or should we close it as as dupe - or do both?

OCR and image processing is an art and highly input dependent. There are plenty of ressources on SO that handle improving OCR quality using open-cv:

which could act as close-dupe-targets. Your answer to use Dilatation/Erosion with adaptive thresholding is a common thing to do for preprocessing and covered in other answers "improve orc for tesseract"-kind of questions: here or there (OP already did dilate/erosion in his code).

Researching SO for "OCR improve tesseract site:stackoverflow.com" would have provided ample questions/answers helping the OP out to solve it without asking.

Downvote:
There are tons of tutorials / how to / tips&tricks outside of SO that help - googling how to improve ocr pytesseract leads to about 96k results - which could warrant a "not enough research" downvote in its current state.

I edited the original image back into the question and fixed the indentation error after posting this to make the question "better" again.

Not the answer you're looking for? Browse other questions tagged discussion specific-question vote-to-close .

90
How long should we wait for a poster to clarify a question before closing?