OP's question was erroneously edited. The moderators want to keep erroneous question as it looks 'pretty' and readable

I have a question about my Stack Overflow post: Truncate column names in SELECT (MySQL client)

The OP for a MySQL query (Truncate column names in SELECT (MySQL client)) had a problem with the formatting of MySQL output, and needed a genuine solution.

The actual issue as stated was: "I see a unformatted output which is hard to standard, specially when you search for little clues like fields that aren't being used and so on."

One @Barmar did provide a good solution, but in the interim, some helpful souls decided to format the MySQL output in OP's question by formatting and making it 'readable' which made the question meaningless as there was no confusion anymore on the readability and the formatted code was no longer "hard to understand".

OP protested twice on the edits to his question:

After this Barmar did revert his changes, but instead of reverting to the original, it reverted to rev. 2 which was a similar readability/formatting change done by scaisEdge (edited Nov 9 '16 at 18:43).

When I came to the question, I ignored the answer and went back to google search as in the first glance, the output was no where like what I was getting, and hence I thought that it was not a pertinent answer.

Only when Google threw me back to the page that I realized that someone had prettified the MySQL output leading to the confusion.

On pointing the same out and trying to revert the same to OP's post, two people rejected it citing readability.

<> reviewed this Aug 13 at 7:40: Reject This edit does not make the post even a little bit easier to read, easier to find, more accurate or more accessible. Changes are either completely superfluous or actively harm readability.

Since there was no way to let these peers/moderators know that readability was the exact problem that is to be solved, I pasted the original output as an answer, so that the next person who comes to the page can directly see the offending, but the actual output one gets when running the command.

However, another moderator deleted the post itself without assigning any reason, and now the next person who comes to the answer is likely to ignore it and start searching elsewhere.

One potential solution that I can think of is to allow the poster to point out the error in review/moderation so that someone can take a look. (It can be a can of worms if there is abuse, but now machines can easily read if some post is abusive).

When reviewers look at that suggested edit it is not clear at all that you are improving the question, no matter what you say in the edit comment.

I understand the question is about layout issues of output of a MySQL statement. I doubt it becomes much clearer when the output is kept unformatted. In general, output of an SQL statement is done in a code layout. Removing such code layout is counter productive as you've seen.

It isn't advisable to resort to posting an answer to raise a complaint (I use complaint mildly here. We don't call people out as that is not nice, no matter how wrong it is what they have done and how right you are.)

Let me suggest a better solution here for the layout issue in that question you perceive as troublesome. I tend to agree a tiny bit (after I looked at the source of the first revision), so let’s get some feedback on some options to resolve that in an acceptable way for all involved. I propose to change that code block to include a quote markup to indicate its special nature:

Alternatively, a screenshot could be provided to overcome the tricky layout altogether: 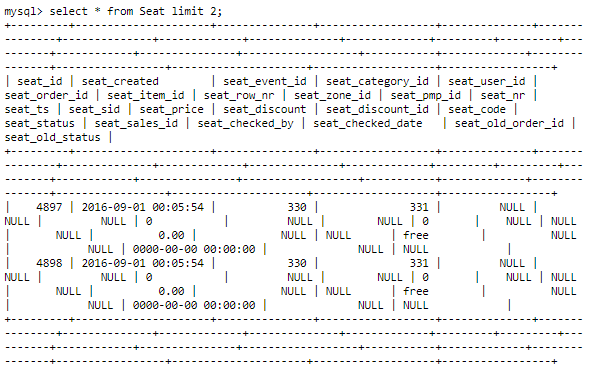 But I'm not a fan of that solution.

Another option surely is the complete deletion of that example output and only rely on the description of the problem being sufficient for future visitors to relate to the problem.

Either way, it doesn't look like this is clear how to resolve, if it needs to be resolved at all. With some brain gymnastics visitors might still be able to understand what is asked.

General advice: Sometimes suggested edits are not the best method to get changes made to a post. This is one such example. It isn't obvious at all that the rollback is the correct thing to do. If you have the privilege to comment or post on meta that are much better venues. There you'll find users that have both the needed privileges, insight and experience to make the best judgement call.

I'm going to say something that may not be the usual Stack Overflow jam, but... is the output important? If you know how terminal works you must know that when the horizontal length of a line is greater than the horizontal length of the terminal, it either wraps around or truncates it (usually the former, and there's the possibility that some terminal emulator decides to reduce the font size for that line... daemon forbid it!). The text of the question is descriptive enough to know what problem the user is facing:

That problem isn't peculiar of MySQL clients, if you are used to the terminal emulator and system administrator roles (dmesg output of a kernel oops without a pager, or cat'ing a file, etc.). Most users of MySQL should know about this that with a short description would be able to figure out the problem.

But even then, that image wouldn't help the users to find the question.

Not the answer you're looking for? Browse other questions tagged discussion review edits specific-question code-formatting .

13
Improve diff view in suggested edits review queue
87
When should code formatting be used for non-code text?
2
It looks like my edit was merged with an edit by the question asker
20
Edit Policy: Helpful vs Readability