What does "Should we add technical Q&A sites like Server Fault, Super User, and DevOps to Stack Overflow?" mean?

The site satisfaction survey has the question:

Should we add technical Q&A sites like Server Fault, Super User, and DevOps to Stack Overflow?

I find it very unclear what this means. It could be:

I'd like to know what this question actually means, but this is also a bug report: Please clarify the survey's text. 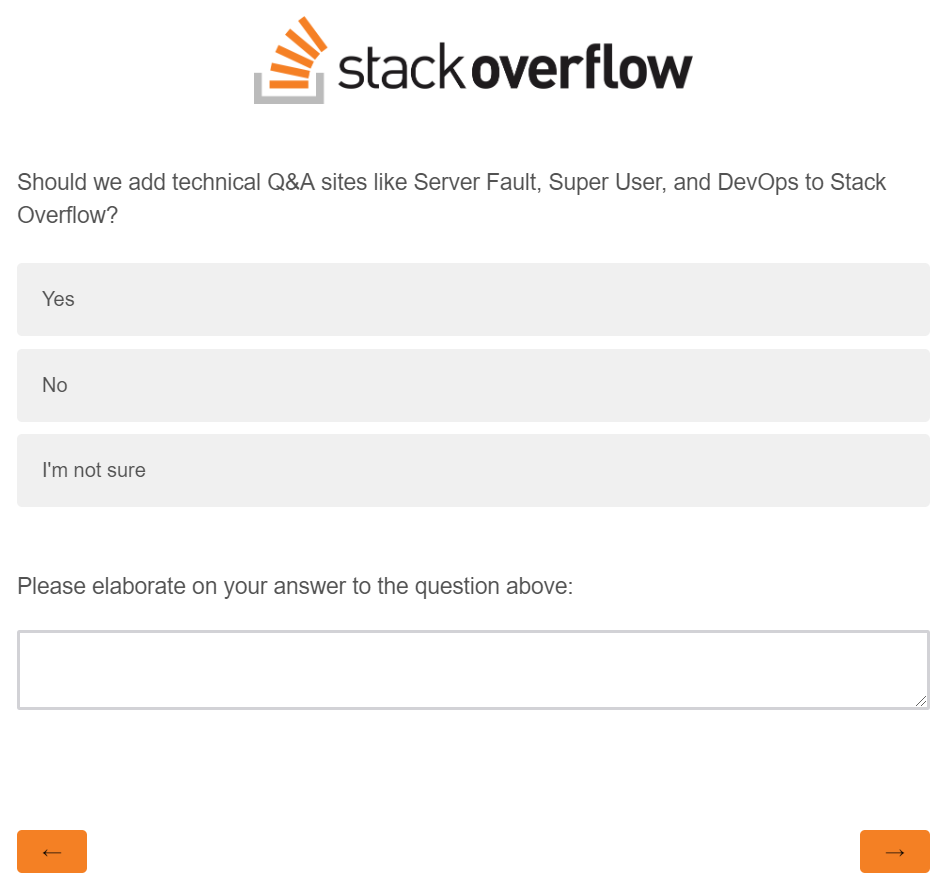 I'm finally in-context to the question being posed in the survey. With that, I can answer this (but not address the "bug" portion of the original question).

The question is simply:

Should we add technical Q&A sites like Server Fault, Super User, and DevOps to Stack Overflow?

and a box to elaborate on why we chose what we did.

The way I'm interpreting this question is that it's exploring what the users of Stack Overflow want to see on Stack Overflow, and if it would make sense to consolidate facets that Server Fault, Super User and DevOps cover on the one site. To be fair, there already is overlap - not much, but some.

A network site - any network site - should have the autonomy to decide what kind of community it wants to build up. Coupling this with the The Loop, I would hope that this feedback gets an adequate amount of explanation and clarification for decision makers.

I'll admit though, I would not want to see these sites combined into one, if for no other reason than it feels like another synthetic attempt at creating value as opposed to exploiting the value already present on the site.

It represents something of a merger to some degree of sites that up to now have been completely separate.

17
What reason should I pick when closing a Super User question?
7
Server Fault close reason text
3
Off Topic Flag -> Server Fault?
20
Where to ask a theoretical computer networking question?
26
Recommend Network Engineering for Professional Network Questions
41
Teams² and Microsoft: What data does Stack Overflow share with Microsoft?
27
How to cite Stack Overflow surveys