Why does the banner include the word "learning" if the actual Code of Conduct makes no mention of it whatsoever?

The Code of Conduct makes no mention of the word "learn" or "teach" in the context of "learning".
The banner does.

Why is this? (Cue mild PTSD from earlier revision)

This is something I've been struggling with for a while now. I have some thoughts, but... Nothing particularly well-organized.

First though, a personal admission: I'm mostly self-taught as a programmer, but... I've never really gotten in the habit of asking questions as a core part of that process. Before I had access to The Internet, there wasn't anyone I could ask; after, there was such a smorgasbord of information available that I didn't need to. Asking a question is usually something I do when I'm stuck - I've exhausted all obvious avenues for research and need a new place to look. So to this day, I kinda struggle to wrap my head around the mindset of someone who is both learning to program and who asks a lot of questions. My default assumption has always been, "they're completely lost; a drowning swimmer in a sea of information, looking for a lifeline". But... This doesn't really match up with a lot of what we see on Stack Overflow...

And then the other day... I found this on Twitter:

Nonconsensual teaching - regardless of good intent - assumes the other party knows less, and demonstrates that lack to both the other person and any bystanders. It removes agency from the other person to agree to the presupposition, or to what's next.

It's a power play.

If reading that bothers you, strikes you as a really twisted, hostile outlook... Yeah, same here. I don't want to work with people who treat learning as a burden, much less try to help them for free. But, let's put those feelings aside for a minute - what we want, what we expect, isn't what we get. You don't need me to tell you that there are plenty of folks on SO who very much do not want to learn, who will react with this same hostility - or more - to any attempt to teach them, and yet... Who are none the less posting questions every day. So if we want to understand them - and I do - then let's take this attitude at face value. If this is truly how some folks are approaching the site, it explains an awful lot of weird behavior:

In short: if you look at teaching as being the winning move in a "power play", then learning is losing. For anyone coming in with this mindset, a helpful response is not one that tries to teach them anything - it's the one that gives them what they need, written to spec, with a minimum amount of back-talk.

...and that's pretty depressing, right? It suggests that Stack Overflow - that every programming site - is doomed to sooner or later end up as one of those terrible "snippet sites" where half the snippets don't work, the rest are full of nightmare security holes, and there's no explanation for anything.

But, maybe it doesn't have to end that way...

Collaboration as an end-run around resistance to learning

Let's assume we have a tremendous volume of users who don't want to learn anything, or at very least don't want to be taught anything. That may not be an accurate assumption - but I kinda suspect it is. How can we possibly accomplish anything useful here?

Well... What if we just didn't say that we're teaching anyone? The magic word here is "collaborate" - we're not teachers and students, we're collaborators; you're not here to listen and learn, you're here to stop, collaborate and listen 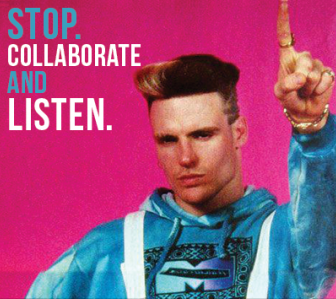 Granted, in any given "collaboration" someone's likely gonna know a heck of a lot more than everyone else. But... It's not necessarily going to be the same person in every exchange; nobody is the expert in everything.

And, this actually mirrors what we've been able to observe for years now: yes, there are a lot of people who only answer, and a lot of people who only ask... But a fair number of answerers are folks who use the exercise as a way to teach themselves, and a fair number of askers go on to become answerers. As easy as it is to fixate on the sweatshop coders who take and take and never give back, they're kind of a minority - albeit a particularly visible one.

Turns out, most folks actually do want to collaborate, even if they don't think they want to learn.

21
How can you reach the Code of Conduct page other than the announcement banner on top?
18
On being nice and still not feeding the trolls or help vampires or whatever
179
The Code of Conduct is a "no moderation" pass? Not on our watch! What can we do?