Could we distinguish between the “Community” closer and the “Asker” when they accept suggested closure?

When looking for example at this question closure information, it confuses me (as a visitor). I see that Tom Brunberg suggested to close that question as a duplicate, but what happened next? 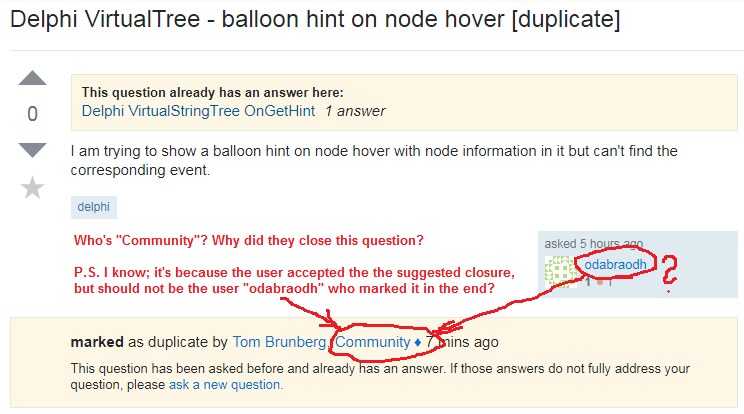 Could we change the final closure "Community" user closer to the "Asker" user?

The user generally doesn't have the power to close their own question, as that power is reserved by users who have enough reputation to close questions, or by moderators.

The Community user is a moderator, and has the power to close questions, and since the OP would be the one requesting the action (and they cannot perform it), then the Community user would need to own the closure action.

The Community user itself owns quite a lot in terms of votes - you can see that on their profile page.

For elaboration (and some technical detail):

It used to be the case that an OP vote was the same as anyone else's vote on a duplicate, but that is effectively worked around by the fact that Community is a diamond moderator and can cast a binding vote on a post. This was implemented back in 2015, and was intended to help OPs more effectively moderate their own content.

Not the answer you're looking for? Browse other questions tagged feature-request duplicate-questions close-reasons .

75
Why does this question show as “marked as duplicate by Community♦”?