Zero-width character does not render properly in close dialog 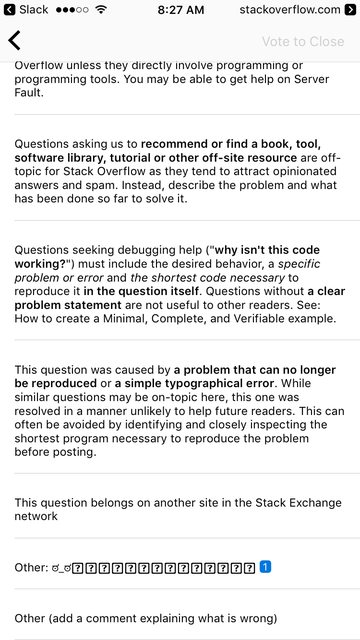 Besides the fact that this is an invalid close reason (I'll have to post another meta about that), the iOS app does not render these zero-width characters properly.

For reference, here's what the close reason looks like on the web:

This is pretty much by design. The label is being rendered with the user interface font, which renders Zero Width Joiner U+200D as an unknown character in most contexts. I'm guessing it's a valid way to handle the character even if it's inconsistent with what WebKit does.

Blame either falls with Apple for not supporting it or Will for using the character without recognizing that inconsistencies in text rendering could expose his zero width secrets. You could also look at the bright side, it's an accidental feature that helps identify users skirting the character requirement. :)

Not the answer you're looking for? Browse other questions tagged bug status-bydesign vote-to-close ios-app custom-close-reasons .

1
When marking a question as duplicate last comment get removed surprisingly
18
Closed questions for tool/recommendation are showing the same but different messages! And the blue # not showing either
3
Elm syntax highlighting does not render comments properly
48
Mobile App Usage Stats
11
Broken “Top Network Post” link and title