Why was this question closed as "requesting an offsite resource"?

I'm asking why this question was closed.

Picture of the post in case it gets re-deleted: 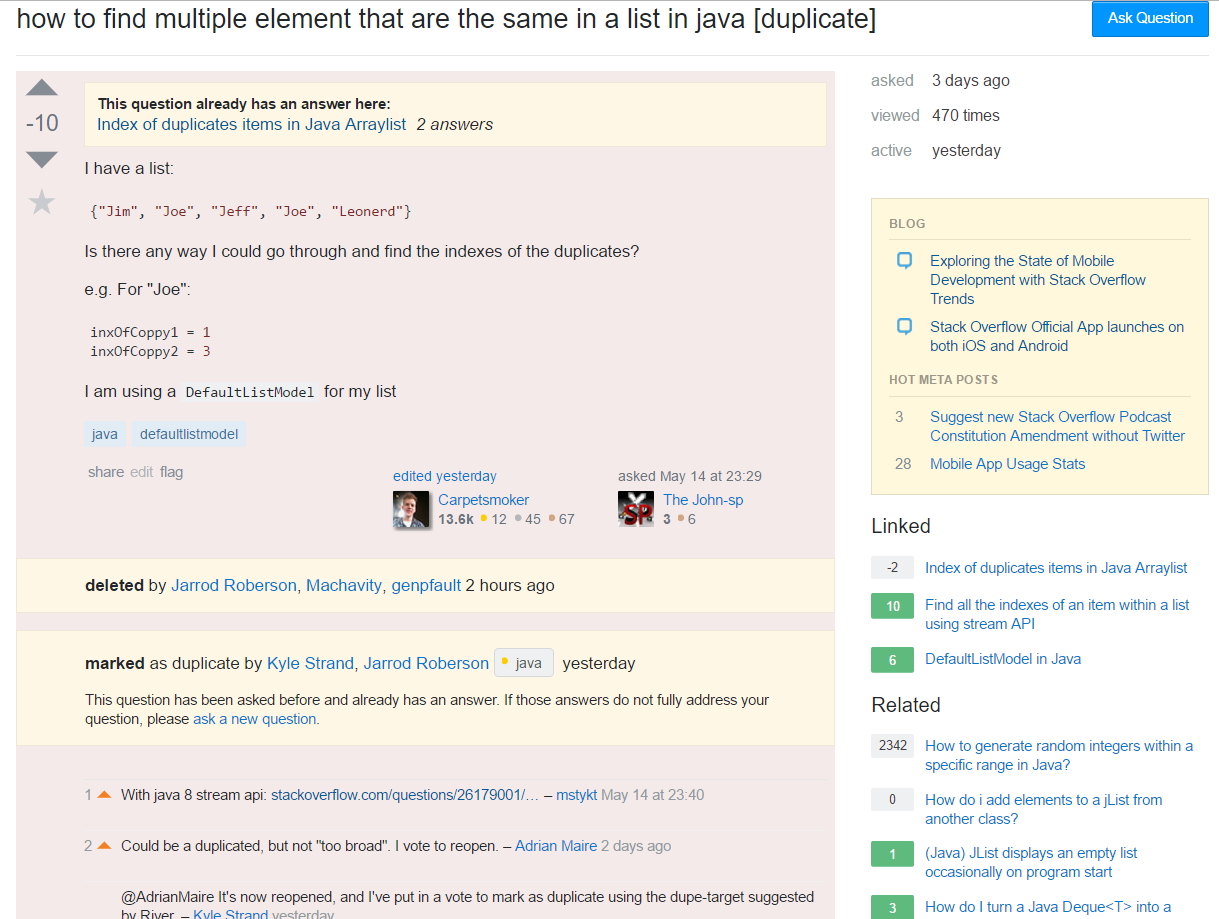 The close reason is:

This question appears to be off-topic. The users who voted to close gave this specific reason:

"Questions asking us to recommend or find a book, tool, software library, tutorial or other off-site resource are off-topic for Stack Overflow as they tend to attract opinionated answers and spam. Instead, describe the problem and what has been done so far to solve it."

But I don't see any request for any off-site resource. The OP simply wants to know how to get the indexes for duplicate elements.

Maybe the question was closed for other reasons? The question doesn't include an attempt at the problem, and isn't particularly well-written or insightful, which could contribute to it being viewed as low-quality. However, this doesn't seem to fit as 4 of the 5 reviewers chose the 'off-site' reason.

Any ideas? Should it be reopened?

It has been reopened and reclosed as "too broad". I'm not sure I agree with that either, as there are plenty of questions that ask, "How do I do {simple task}?" that aren't closed as such.

Furthermore, I think I have a better solution. After looking around a bit more extensively, I found this duplicate. We should close this question as a duplicate. Of course the original can then be closed as "too broad" if wanted.

For those wondering why my answer seems to mirror the top, older answer, it is because that answer originally used a different (wrong) method. When I pointed out the flaw, his answer became pretty much the same as mine. (And attracted some upvotes for being older I suppose.)

Yes, the close reason was incorrect.

The question has been reopened and reclosed twice, the first time as "too broad", which didn't seem quite right, and the second time as a duplicate. This final closing seems to have taken.

Or not, the entire post has now been deleted.

It has been undeleted.

It has once again been deleted.

Requesting an off-site resource would probably be the incorrect close reason indeed. However, it doesn't matter all that much. The important thing is that the question was closed.

As a rule of thumb: if a question should be closed but was closed for the wrong reason, leave it be. Don't bother re-opening questions just to close them for another reason. Doing so just creates extra work for everyone, by shovelling crap between various review queues.

Looking at the original question https://stackoverflow.com/revisions/43969753/1, it is a very broad question that just (not too clearly) asks how to search through a container with no specifics mentioned and no code or effort by the OP. Mostly it is a code begging/"read the manual for me" question.

This could have been closed as too broad, but any form of close reason is fine, since SO is not a code-writing service.

807
Stack Overflow question checklist
40
What's better: a question with no attempt or with an unfixable/irrelevant attempt?
2
Why is this question closed as tools recommendation?

15
How does this ask for an off-site resource?
2
Please explain why this question was closed as off-topic
14
Why is this C question about (watchdogs? thread debugging? programmer harassment?) closed as a "recommendation" question?
13
Why was this question marked as recommending a resource?
22
Why was a question about installing NetBeans closed for seeking recommendations?
3
Another incorrect "recommend an offsite tool" close vote - does this happen often?