Are questions about software tools on-topic?

Since when are questions like these OK for Stack Overflow?

I've been less active on Stack Overflow for a couple years now, but there was definitely a time when things like this would get removed almost immediately. Given that one of the VTC options is this... 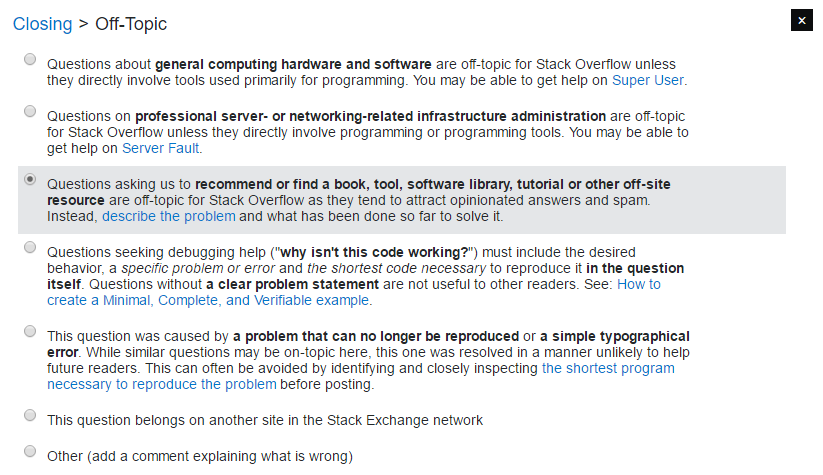 ...why are we allowing questions like the above on the site? In a very subtle sense the questions are not asking to recommend a tool, but they aren't programming questions either.

Questions on software tools might be on-topic, as per the help center:

The first question would better suited on SuperUser - though the author mentions they're using xcopy as part of the build process. The second seems a bit too 'simple' for Database Administrators, but a reasonable question for somebody starting out with MongoDB in a development project. I think both questions borderline belong on Stack Overflow. At the very least, they're certainly not recommendation questions.

why are we allowing questions like the above on the site?

Because no one has voted to close them yet.

In a very subtle sense the questions are not asking to recommend a tool, but they aren't programming questions either.

I would have voted to close with the reason: "Questions about general computing hardware and software are off-topic for Stack Overflow unless they directly involve tools used primarily for programming. You may be able to get help on Super User." They aren't tool recommendations.

Where do questions about technologies go?

I'm going to start by asking a question. For each of the following technologies, what's the difference between programming in them and just using them?

The best answer to that question is, "If there is one, it's so small it's not worth even thinking about." Maybe you could say, "If you're saving a script," but that's an utterly useless distinction, especially in terms of StackExchange site categorization and where a user could openly lie about it and no one would be the wiser.

Another question: where do questions about vim go? They could go here on SO, since this is something software developers use regularly. They could also go on SuperUser, since it's just a text editor that's used in routine tasks when using some operating systems.

That fact applies to the technologies in the questions you linked as well. xcopy is definitely a tool software developers commonly use in scripts. MongoDB is definitely a tool developers commonly use to store their data. Okay, they're not the most stellar questions ever. Sure. The first one could maybe get a better answer on SuperUser. And okay, the second question is probably poorly researched. But that doesn't mean that the topics they address are outside the site's scope. These are reasonable questions for a programmer to run into during the course of developing software, and that means the subject matter is in scope for SO.

We shouldn't try to make categorizing questions on StackExchange as strict as our compilers are.

There's a pretty sizable chunk of overlap between SO and its sister SuperUser, Programmers, DBA, and ServerFault sites. That's fine. It's okay if some questions could fit on multiple sites and even if they're posted on multiple sites. No puppies or kittens will die if a cross-site dupe exists. This is a pretty regular occurrence between SciFi and Movies & TV, and the sites aren't burning down for it.

I'd also like to make note of the definition of SO's subject matter from the help:

Some users emphasize the word "unique" there, but as I've demonstrate with my earlier questions, this isn't something we can define very strictly. It's also worth noting that they didn't choose the word "exclusively," which would more clearly convey the idea that it cannot be something related to another field. This could perhaps be better worded as "strongly related to software development," but the point is to paint a bit of a picture that, "This site is for software development problems." Pretty much every word in that description has some level of vagueness or subjectivity.

What problem are we trying to solve?

Sites are assigned a specific topic to help solve the problem of which experts need to view these questions. We have further divisions within individual SEs (tags), of course, but choosing the site is the first step. It identifies the field of experts the asker needs to reach. Most software development experts familiar with the technologies in question are perfectly capable of answering these questions. So we're left asking, "What problem are you trying to solve by closing these questions?"

I think this is an XY-problem. You're concerned about site quality (We all are.), but you've gone down the wrong path to solving it. Go back a level to the question above this one: what can we do to improve question quality? I think you'll find that, "Closing all questions that ask about details of executing a tool," is not a good solution to that problem.

As noted in Glorfindel's answer, questions about "software tools commonly used by programmers" can be on-topic.

Personally, I think that text should read "software tools commonly and primarily used by programmers". I.e. as programmers there are a lot of tools we use which are general purpose and not really specific to programming. It seems to me that questions about such tools are better handled elsewhere and don't add much if any value to Stack Overflow. IMHO, this interpretation is supported by the vote-to-close dialog box itself, which reads "unless they directly involve tools primarily related to programming".

But at least according to the Stack Overflow Help Center guidelines, any tool commonly used by programmers would be fair game.

As far as reasons to close the two questions you've referenced, it seems to me that neither are actually "recommend/find" questions in the spirit of the vote-to-close dialog box. The "xcopy" question comes the closest, but it's not really asking for help to "find" the xcopy tool in the way that the vote-to-close reason means, i.e. "where can I download this tool?" but rather it's more about system configuration.

That said, that's not to say that either of these questions should remain open. The first one clearly shows an utter lack of research. At the very least, it deserves a down-vote. And if you agree with my reading of the vote-to-close dialog box, the xcopy tool is not primarily related to programming and so questions about it, its location, or its host (i.e. Windows), would be off-topic.

The other question, even if you accept that MongoDB might be "primarily related to programming" (which is debatable), is in any case clearly too broad. It should be closed on any site on that basis.

So why haven't they been closed? Well, as already noted elsewhere, mainly because no one's closed them yet (and that was only the case earlier…they've both been closed at this writing, though sadly the "xcopy" question has already garnered two reopen votes.

Speaking of which, that's a big part of the problem. It's hard enough to get enough experience Stack Overflow users to be able to have the time and a large enough vote quota to keep up with the deluge of pointless, lazy, off-topic questions that swamps the site every day. But on top of that, there are users who for whatever reason go around actively voting in favor of bad questions and answers.

That's a whole other discussion, which you can find some of already in various other Meta posts.

9
Are questions on programming tools installation/configuration on-topic?
75
Overhauling our community's closure reasons and guidance
17
Are programming tool name origin questions considered on-topic?
47
Is it tools used ... "Commonly By Programmers" or "Primarily For Programming"?
31
When is a question about a Unix command complicated enough to be a programming question?
22
Why was a question about installing NetBeans closed for seeking recommendations?
26
High-level algorithm/engineering questions
-2
Question about running Docker got closed
-21
These review audits are unfair, one of them was closed for the reason I flagged (and failed)
10
Is a specific Docker networking issue really about "general-purpose software"?
See more linked questions

12
Are questions asking whether a product is maintained on topic?
46
Why are there so many non-programming questions on Stack Overflow?
21
Is Metasploit software primarily used for programming?