In years past, I recall seeing flag totals for nominees participating in an election. It was the value under "helpful flags": 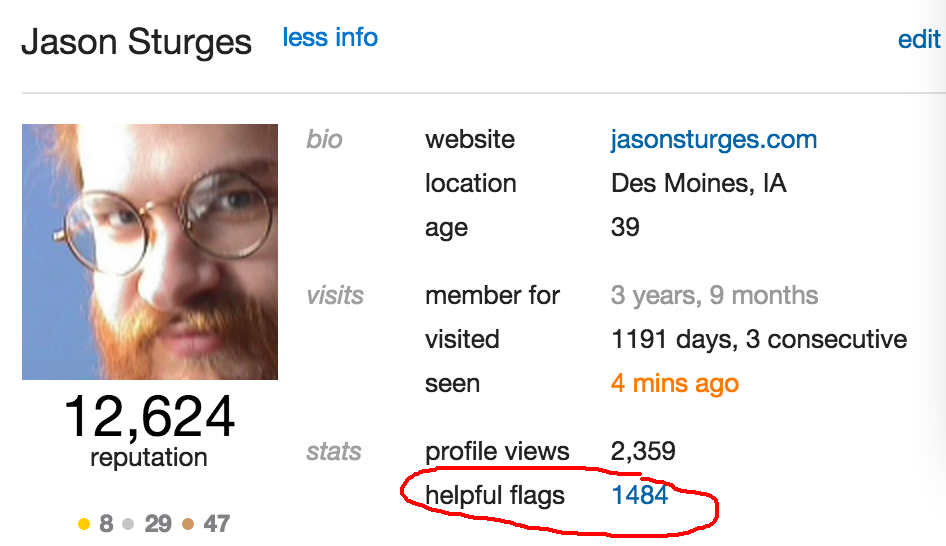 Why isn't that included in the "candidate score" of this years election?

If the metric has lost its value, why do I see it on my profile?

Why not see my candidate score on my profile?

Flags are great. When you encounter a problem that you can't handle yourself, bringing it to the attention of the mod team is extremely valuable. But, flags are not the be-all end-all of moderation on Stack Overflow; in fact, they're just the start:

One thing we realized is that the mod flag dialog ends up being training wheels for closers.

As important as it is to get folks involved in moderating the site, fixating on flagging during moderator elections was getting to be a bit silly; no matter how good you are at riding a bike with training wheels, it doesn't say much about your ability to ride the Tour de France. Maybe you'll be great - after all, you have plenty of enthusiasm... or maybe you'll fall over as soon as the supports are gone.

A couple of years ago, I saw this as the first comment below a candidate's nomination post:

How do you explain having only raised 406 helpful flags over 4 years?

The candidate in question had many thousands of close/reopen/delete/undelete votes under his belt, not to mention up/down votes. He was active in the (then still fairly new) review queues. He was moderating! But he wasn't flagging very much. He didn't need to. But you couldn't really see that in that one lone statistic.

A good moderator candidate did not ask somebody else to take care of what he saw going wrong. He took care of it himself with the privileges that he got from having enough rep.

When the new moderators get their privileges at the end of the election, they will suddenly have immense power within the system, near-absolute trust in situations that formerly allowed - required - a sanity-check from someone else. They have peers they can turn to for guidance of course, and if nothing else they can always come here and ask for advice. But it's not feasible to do that for every flag, every odd situation, every angry user, every hard choice... Assistance is available, but the training wheels are gone.

This, then, was my goal with the new candidate score:

it makes it hard for someone to dominate the list with one statistic (rep, flags) if they haven't done much of anything else.

Flags still count: you can earn a few points via flagging by earning the Deputy and Marshal badges. That's 2 points out of 40, 2 out of 8 possible "moderation score" points. And of course reputation counts for a lot - that's how you earn the rest of the privileges! But a well-rounded candidate should have a lot more candidate-score points, earned via tasks such as voting, reviewing, and editing. Folks who've been around for a while, who've taken it upon themselves to solve problems when they see them, these candidates will already tend to have a pretty respectable score. And, I expect, a pretty good preparation for the rigors of moderating.