How should I get started reviewing the Late Answers and First Questions/ Answers Queues?

I've just gained 500 reputation and am thinking about doing my part in the First Questions, First Answers, and Late Answers queues. What are these queues for? What do I need to keep in mind to do a good job and avoid wasting my own or others' time? And what about those audits that I've heard about?

Statistically, there's a greatly elevated chance that a new user's first post(s) (especially one answering an old question) will be generally garbage. Maybe it's spam; maybe it's a misplaced comment, vote, or even question or answer; maybe it's something else. Given this, there are three review queues that exist to separate those posts from the decent/ great ones and handle them appropriately: First Questions (FQ), First Answers (FA), and Late Answers (LA). 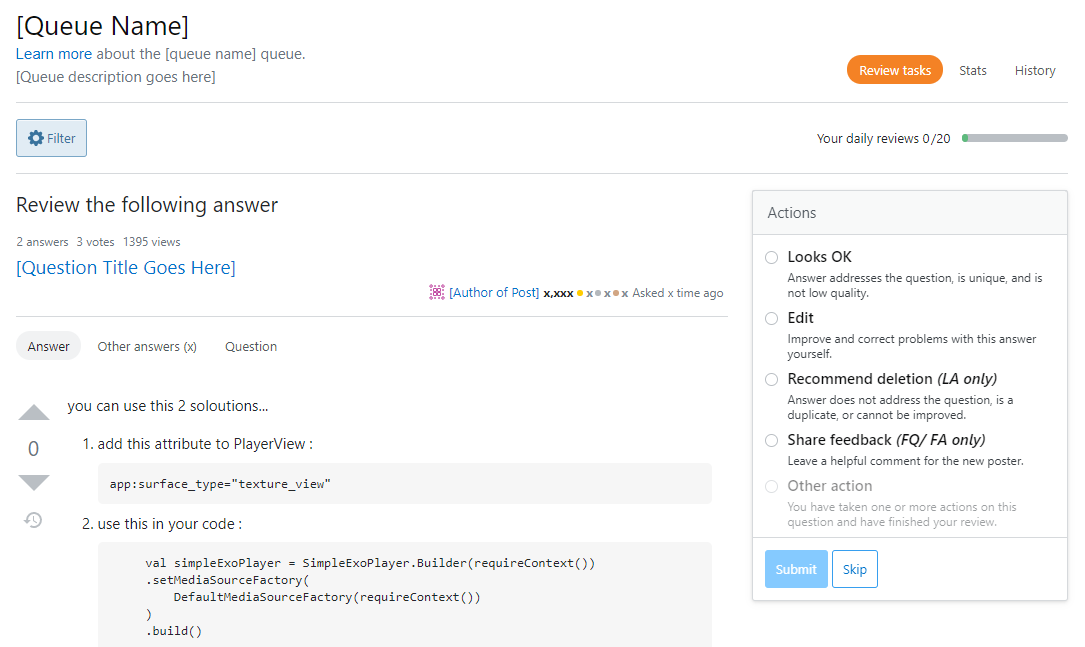 Every single review, no matter what action you take, will end with either selecting an option in the "Actions" list and clicking Submit, or by clicking Skip to skip the review. Even if you've taken some action on the post, the review will not be recorded unless you submit or skip it.

If the chosen action opens a modal (eg. to select a canned comment to leave on the post), this modal must also be submitted to fully complete the review.

Whenever reviewing a post, start out by taking some time to consider each of several possible flaws it might have; First Questions (FQ), First Answers (FA), and Late Answers (LA), unfortunately, cover an unusually broad spectrum for review queues, so you have to keep a flexible focus and not simply select Looks OK just because it passes a couple of the smell tests.

Below is a rather thorough list of potential flaws, which you'll want to run through in approximately the order given to avoid wasting time or missing something important. (Actually, it's deliberately rather over-written; don't be too put off by the length. Once you've gotten into the rhythm with some good reviews, you shouldn't need to refer to this very often at all. Still, skimming it every once in a while may be a good reminder.)

Keep in mind that whenever the guidance mentions taking some action on a post (eg. flagging), after taking that action, you'll need to select an option in the right-hand menu and actually submit the review. In FQ/ FA queues, this will often mean selecting the Other action option, unless you also want to take one of the other existing review actions. In LA specifically, if an answer isn't worth keeping around, you should select Recommend deletion instead (this will also prompt you to optionally select a canned comment to be left on the answer as the "Community" user, which you may do if appropriate).

In FQ specifically, if you see a question that:

There's a good deal of guidance around proper flagging for various categories, and you should look into that for a more complete understanding. But if you misflag occasionally, you'll generally get feedback, albeit rather tersely, and can then figure out what you got wrong. Ask here on Meta if you really get confused.

Up- and down-votes are a rather odd part of these queues, and strictly speaking are never necessary. However, given the opportunity, it can be handy at times to vote on posts you review.

You might notice after a while that the comments on a lot of these get pretty repetitive. If so, consider digging up a prefab comment list/ tool, perhaps one such as Nathan Tuggy's list here, but handle with care: dumping thoughtless autocomments where they only partly apply can be rude and not particularly helpful.

A final note: from time to time you will run into review audits. Some, you will fail, because audits are imperfect and so are you; even moderators fail audits. Most of the time this is not a problem, but there are a few known catches that can make you fail audits more often than is really needed.

This answer was revised and substantially expanded from the original Nathan Tuggy wrote, as the question did not seem entirely suitable for a FAQ.

23
Review an answer that isn't an answer to a question that isn't a question
35
Is technical correctness check expected during Late Answer reviews?
-13
Review audit failed for low quality posts?
-19
Do we need to review accepted answers?
10
Late answer already flagged as "Not an answer"
-11
Why is this OK-looking Late Answer deemed unacceptable by the review queue?
12
Guidelines for new reviewers
3
Review audit: Answer marked as spam, unclear why
-3
Do reviewers need to be domain experts?
5
First post review audit deceptive because a copy-pasted answer ought to be flagged
See more linked questions