There are many proposals for changing the rep incentives associated with closing vs answering duplicates. But they either (1) can be gamed, or (2) penalize users who put work into answers on interesting niche questions, for which the duplicate was hard to find.

I have two suggestions, which I'll post separately to allow separate voting. The other is:

First, when asking a question, there is a list of supposedly-similar questions shown after you type a title. After posting a question, links to related questions are provided in the right-hand bar. The quality and relevance of the latter is far better than the former list, probably because it considers both the title and the actual question content. Let's kill the former list completely.

Now I see a similar questions list as I write this suggestion, and it does seem to be updating as I add explanation. That's good. But it's not part of the main workflow like the first list, instead it's shuffled to the side, with colors that make it easy to ignore. In fact, as an experienced member of the site, I assumed1 it was the help-with-Markdown-syntax until I took a closer look. Users who may be new here but familiar with wikis and other Q&A sites are probably thinking the same thing. And there's reverse incentive to go through that list carefully, since it interrupts describing the problem, and also increases the chances of losing my work. And it's still easily ignorable.

So here's what I propose:

1 Actually, I went back and started typing a satire of the usual "why are my question-asking privileges revoked"-type blather that's so common, in order to re-observe the actual user experience. Lo and behold, it WAS the Markdown syntax help before it was the related questions list. In fact, it went through "Types of Questions to Ask" (when adding a title), "How to Tag" (when putting support in the Tags list), and "How to Format Markdown" (typing the first few lines of the question). All in the same color scheme. I noticed this because I was really looking for the related questions list that I promised shows up. Well, it did eventually show up, after typing about four paragraphs of pseudo-question. Still in the same color scheme. It's no wonder people are tuned out. 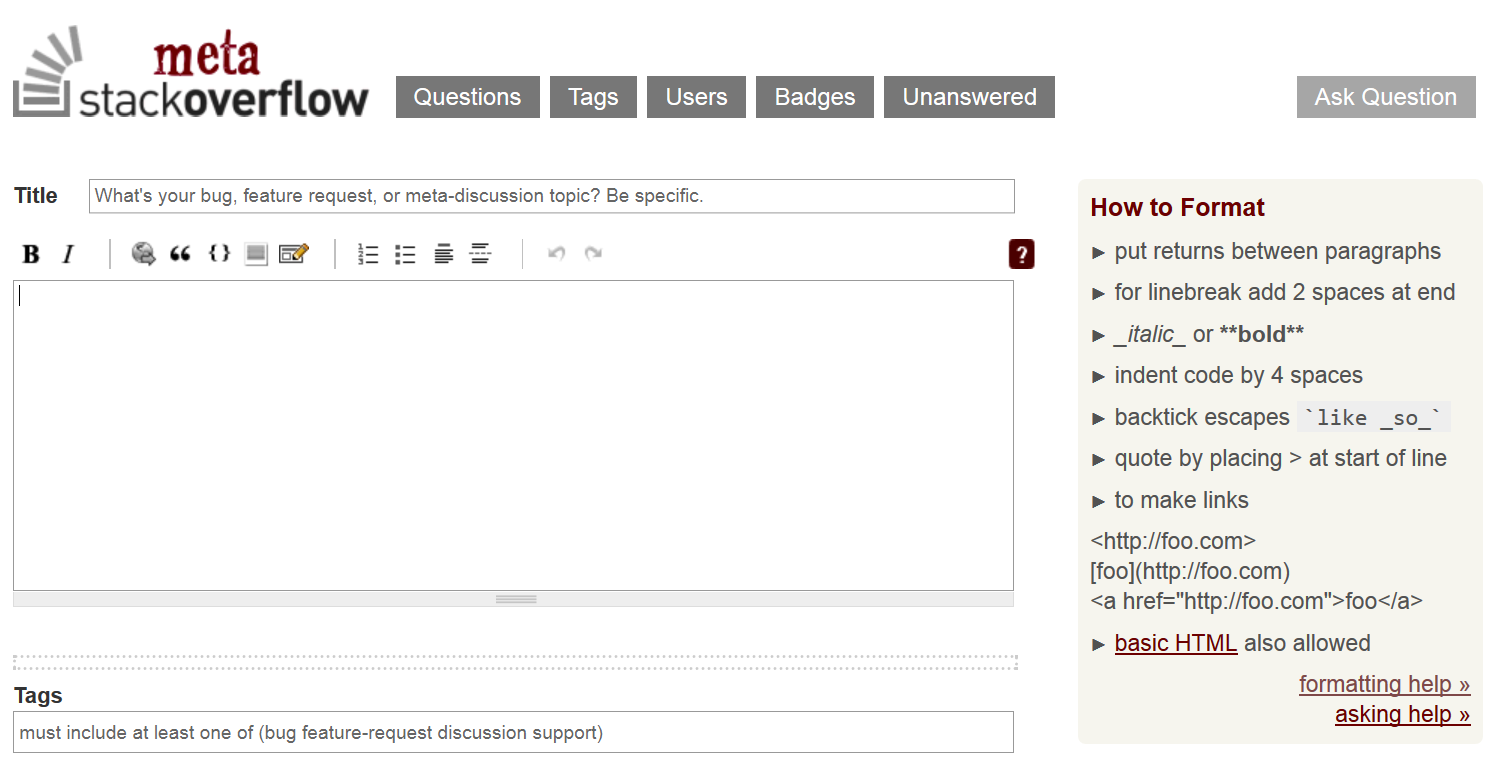 There needs to be ONE LIST. It needs to use whichever of (TITLE, TAGS, QUESTION BODY) have been entered so far. 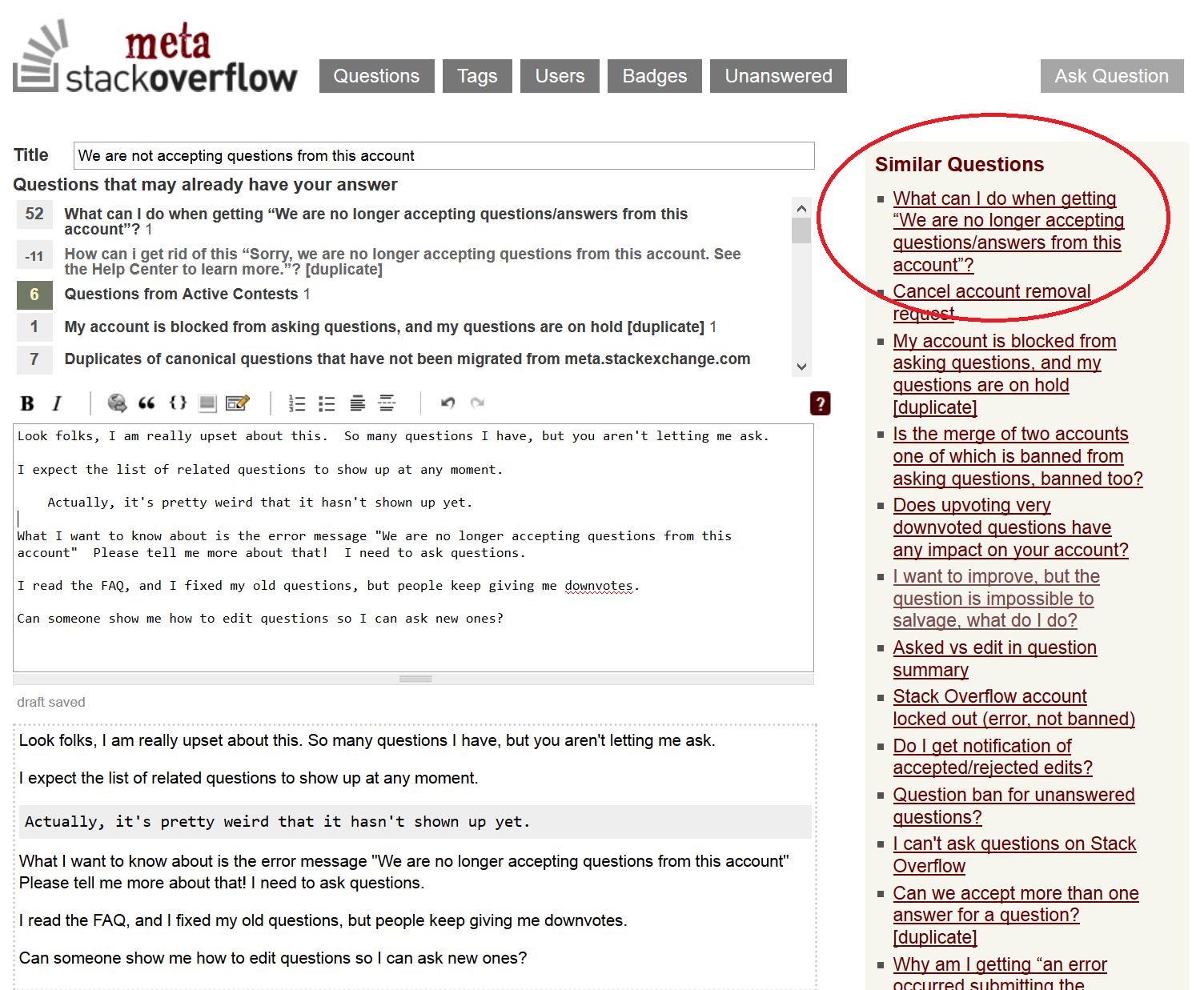 I like the general idea, although your idea of requiring someone to write out a pairwise-explanation of why each match isn't a duplicate will probably not fly.

However, having the list of likely matches very visible is important, and I think requiring the asker to explicitly dismiss that list could help.

These questions appear to be very similar to yours:

Before posting your question, please review these questions and

(That last bit being a checkbox that must be clicked before the submit button becomes active.)

Won't stop people who just can't see the connection between their problem and a similar one that uses slightly different wording. Neither would a more complicated system, however (as A. Ward says in the comments, someone could just write a meaningless explanation for why their question is unique).

The real difference is that a simple reminder + checkbox to confirm you've read it doesn't slow down or inconvenience the people who have done their research, searching through dozens of questions, before posting their own.

You don't want to stop the good questions, after all...

Be careful - that algorithm will be flawed in the beginning, and making it mandatory will make the pains more apparent.

From what I've seen of duplicate questions, they typically fall into two categories:

The latter type is the one that burns both duplicate-close-voters and askers alike - they see, "Oh hey, this question is already answered, let me see what it says," only to find that their question, while similar, isn't completely answered by the answers provided in the duplicate.

I personally don't feel that it should be mandatory for that reason; if the question isn't answerable in the same fashion as the duplicate question, then we're not doing the asker any favors by closing it as a duplicate. We may even be actively hurting them with that.

Here's a for-instance: out of all of the questions that showed up as a potential duplicate of this one, how many of them had an answer that you felt was satisfactory? What if the system were to deny you the privilege of posting this question?

If the user hasn't bothered putting their title into either google or the stackoverflow.com search field, I don't care about saving them a little time on their writeup.

I did. I don't get proper results back. This has been noticed on MSE a long time ago.

I have my answer and I didn't burden the community.

I don't have my answer and I post my question. The duplicate pops up in the related bar, I get downvoted, my question becomes closed, and whilst I have my answer, I don't really feel great. Particularily the part where people will ask you things like "did you even search for x y z" (yes, I did) when the duplicates show up in the RELATED section.

I mean, this will just create strife and increase the time it takes for me to get an answer that already exists. Why did you think this was a good idea?

Not the answer you're looking for? Browse other questions tagged discussion feature-request duplicate-questions .

43
Why isn't this obvious duplicate offered when asking the question
21
If another question is the answer, is it a duplicate?
73
Show likely duplicates to triage reviewers
4
Question closed as duplicate; doesn't look like one to me
224
Make Stack Overflow more friendly: remove the stigma of duplicates?
1
Identify duplicates in "Ask a question" wizard