I finally saw a question that could use Closing > Off-Topic > Belongs on tex.stackexchange.com: 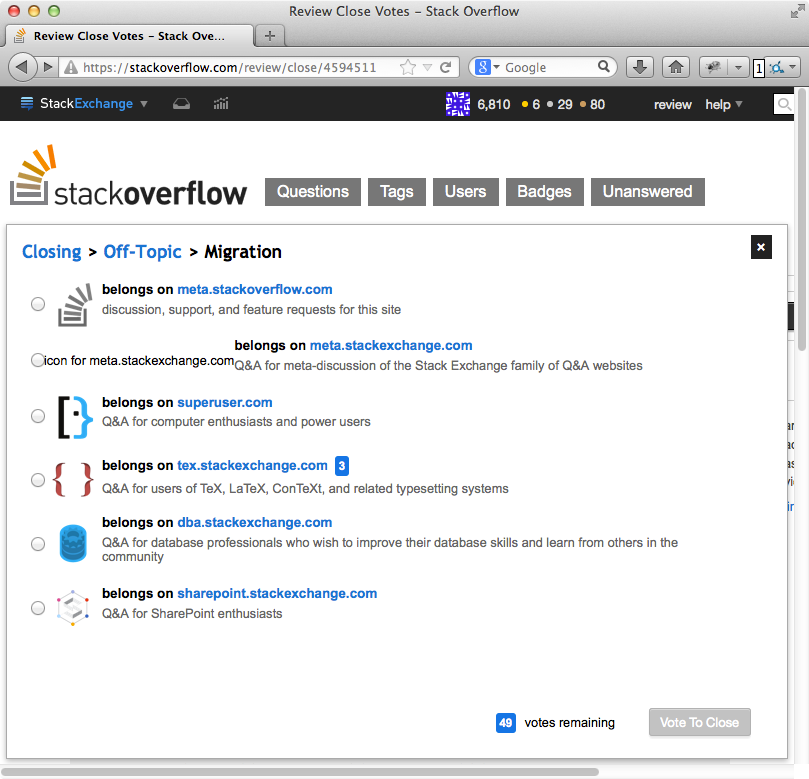 Again, they are only observations from performing reviews. I don't know what the site moderators frequently encounter when they move stuff.

Would it be possible to remove some of the lesser used pre-supplied reasons in favor of more popular, pre-supplied responses. The two I think that would be most useful are:

Or better (perhaps): would it be possible to offer a drop down of the related sites? This option has the benefit of providing metrics so that statistics can be developed. But it also probably requires some coding changes, and I'm not trying to pile work on the site developers.

Retaining Belongs on superuser.com seems OK to me (as does Belongs on serverfault.com), but I don't understand why its provided on multiple screens.

This appears to be related: What should the new default off-topic close reason be?, but it does not address the existing, less frequently used reasons and the duplication of close reasons on different screens.

@hichris provided a better reference at More options when flagging for migration. However, I'd rather have a dropdown with available sites (rather than hammering moderators as suggested with: If you feel strongly a question belongs on a site that isn't listed, then there is a way to do this -- flag them for moderator attention instead!).

"Belongs on Meta Stack Exchange" option was a side-effect of the MSO/MSE split that happened earlier today. I removed it.

The rest come from the migration stats on Stack Overflow. Those sites, with the exception of Meta Stack Overflow since site metas are always an available path, are (or at least were the last time these paths were reviewed) the most frequent destinations for migrations from Stack Overflow.

These can be reviewed, we can look at the stats, and I hope a few others chime in here with their thoughts.

(On a side note, the "belongs on Super User" migration option and the off-topic close reason look similar, but only one will actually move the question over to Super User. The latter is for questions that may be best asked on SU, but aren't good enough to migrate outright.)

I've voted to migrated many times more questions to SharePoint or DBA than the number of questions I've encountered that might even remotely be a candidate for Security or Cryptography.

This is from non-tag-specific browsing - the tags I'm interested in don't get any questions for which these reasons may apply, except maybe Cryptography (which is ironic), but then again, I ignore a ton of tags, so maybe one of those makes me miss most of the Security or Cryptography questions (although nothing seems to stand out as particularly probable candidates). I also ironically ignore all SharePoint tags.

I personally prefer the non-migration Super User close reason, so I don't mind that one going too much - I agree that one of the Super User choices should go.

35
What to do when a question is off-topic for all of the listed sites in the close flag?
13
How do I indicate that a question belongs on programmers.stackexchange.com?
9
Customize "Belongs on another SE site"
6
Allow per-tag migration reasons