Bounty expiration notifications off by day

I had placed a bounty on a question of mine on January 25 to reward an existing answer and to draw attention. I got a notice 6 days later, on January 31 that my bounty is going to expire in 1 days, and I decided to award the bounty to Wim who had posted a rather adequate answer.

Immediately afterwards I decided to add another bounty, worth 100 to draw attention to the question. I decided to wait until the grace period to see if there were other accomplished answers that I could award the bounty. Well, I received a notification on Feb 7 that my bounty was going to expire in 1 day. I took it for granted that the message would mean that the grace period would start in 1 day after the notification, and didn't check the question. In fact, by the time I read the notification on the morning of Feb 7, the grace period had already started. Furthermore, this time I was notified on the 7th day after I placed my bounty, possibly because being close to some cut-off time?

Here's a screenshot of my notifications; the timestamp of the notifications has been made visible with a CSS trick in Firefox Developer tools: 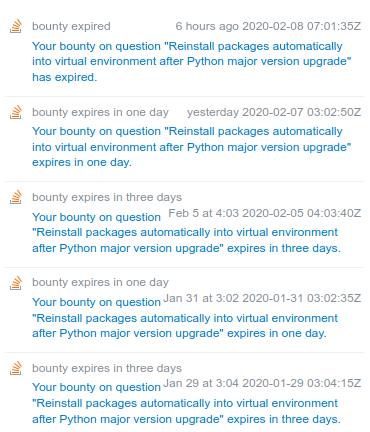 And here is the question timeline.

Jan 31 is the 6th day after Jan 25, and Feb 7 is 7th day after Jan 31. I did also receive a mail about my answer being in a grace period at last midnight UTC; by that time I would have had 5 hours time to actually award the bounty until the end of the grace period. Naturally I was unaware of all this as I was asleep, waking up at 7 AM EET, which is about 11 minutes before the grace period ended or so.

Was there a bug in the bounty notifications or was some run skipped? Or is it so that the system is so dummy that it runs only once at some random time at night?

There are feature requests like this one that asks for the time to be added to the mail. At least in that question the user admits not being at the computer for the entire daytime, but in my case the notifications were equating 3 hours of local nighttime with "a day".