I faced the same issue few days before with the ell.stackexchange.com advertisement in the Stack Overflow sidebar.

The issue occurred after clicking on the advertisement, so I don't have much information about the URLs. I'm using Mozilla Firefox (can't confirm it reproduced in Google Chrome too).

The screenshot taken after clicked on the advertisement: 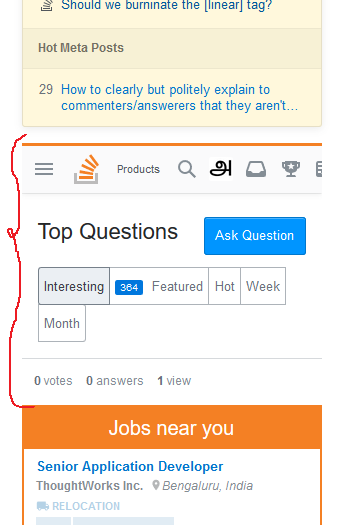 Today I got a chance to see another Stack Exchange advertisement in the side bar and able to record that.

The URL used for the advertisement is

in the plain text:

4
stack exchange advertisement issue
3
Side ad link opens in the wrong place
3
Cannot click hot network question "ads"
3
Stack Overflow rendered inside an Ad
3
CraftCMS StackExchange ad broken
2
Stack overflow inside Stack Overflow?
2
Advertisement when clicked loaded stackoverflow in a frame
2
Clicking on an ad replaced itself with SO page in that small place!
1
Page cannot be redirected when clicking on advertisment