Why are question titles in the Achievements dialog suddenly bold?

Why are the question titles in the Achievements dialog now suddenly bold? They used to be normal text, and the other nav bar dialogs aren't bold, so why this change? Looks out of place and inconsistent from a UI perspective. 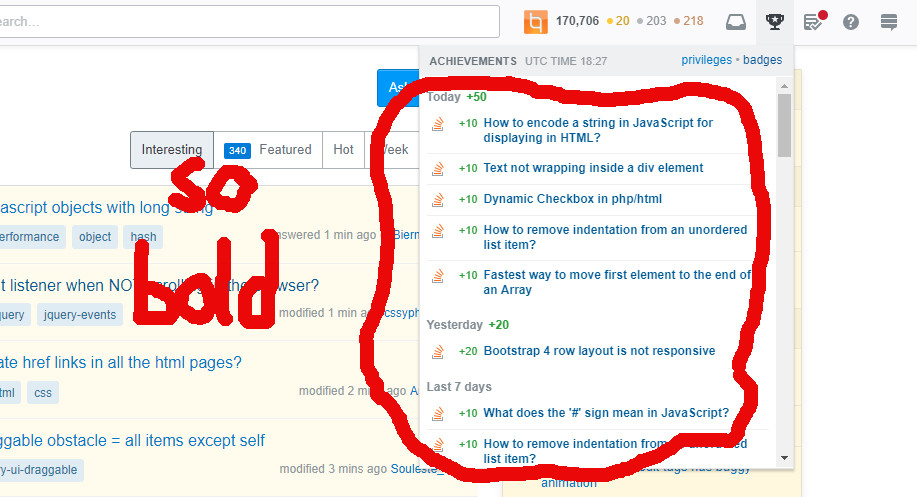 We're working on some accessibility improvements and one that was requested was to make unseen alerts in the inbox and achievements dropdowns more distinct from viewed ones, which previously were only different because they had a slightly different background color - a pale blue. The general recommendation by accessibility experts is to avoid color-only changes, so we increased the font weight in addition.

Unfortunately, when the change was originally rolled out, there was a small bug in the Achievements dropdown that caused all of the items to appear in bold regardless of whether they'd been viewed or not. Our developer, Jane, explains what happened in this bug report on MSE:

I'd accidentally left emboldened font in a rule for all of these elements in our less file instead of just for the ones with the unread-item label. It was something I'd put in during testing to figure out where the put the rule on the unread-items label but I forgot to take it out after.

This was fixed and should be behaving as expected, only appearing in bold when the event is first viewed.

Thanks for reporting the issue!

63
Mark rep loss from posting a bounty as "seen" automatically
6
Why does body text all appear bold on macOS in Safari?