Unsupported conclusions regarding the question about the use of unit tests

I think there is a problem with the question about unit tests and the conclusions drawn: 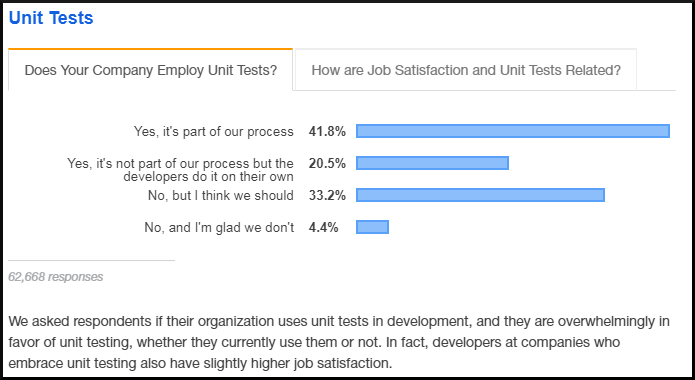 ...they are overwhelmingly in favor of unit testing...

The problem is that you don't catch people in the 62% that do use unit tests but don't like it. You only catch the opinion of the 38% that don't use unit tests. Theoretically, 100% of the people using unit tests could hate it - even the 20% that could feel forced to do it even though it's not a part of their official process.

I have nothing against unit testing, but I don't think you can state what you do about the data.

I don't think you can state what you do about the data.

As the saying goes: there are little lies, there are big lies, and there are statistics.

You have identified one issue, but there are quite a few if you look closely. Let's be real, though, the SO Survey is not really an attempt to be scientifically rigorous. It's more of a fun little thing that's meant to be mildly interesting, and they're not submitting this for peer review or trying to make grandiose claims based on their minor conclusions.

Nonetheless, there are some things I didn't find tenable.

There are claims in the summary which are obviously unsupported or flat-out contradicted by the data (not counting the one you mentioned):

There are claims which may be untrue depending on additional information:

There are claims which are blown out of proportion or could mislead:

There could be more, but I don't have time to keep reading it so closely.

Not the answer you're looking for? Browse other questions tagged discussion survey survey-2019 .

34
Why was “Hourglass” deleted?
32
What to do with all the questions about scanf?
3
Is my question about the machine code syntax of a CISC instruction set binary on-topic?