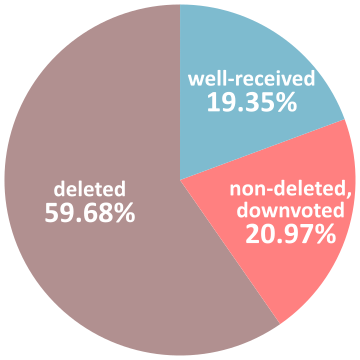 276
Can we make this meta site work for mentoring?
212
Can we make it more obvious to new users that downvotes on the main site are not insults and in fact can help them help themselves?
40
Fix or remove the useless 'I have a question about my Stack Overflow post' template feature
41
I don't know the reason my answers were deleted. What should I do?
58
Should the "ask about own post" feature be enabled here on Stack Overflow?
-19
Create a special mod flag for new users when their post is put on hold, deleted or heavily downvoted
79
Why doesn't the system prevent repeating the exact same question?
3
Is it required to react quickly to an answer?
-4
Why was my question about UAC prompts closed?
7
Why was a 1 reputation user able to post an answer on Meta?
See more linked questions

161
Give greater dominance/placement to searching rather than asking for new/low rep users
58
Should the "ask about own post" feature be enabled here on Stack Overflow?
40
Fix or remove the useless 'I have a question about my Stack Overflow post' template feature
136
Feature Test: Ask Wizard for New Users (trial has completed)
78
Ask Wizard for New Users Feature Test is complete