My vote count in my profile is incorrect

My "Impact" box lists my vote count as follows: 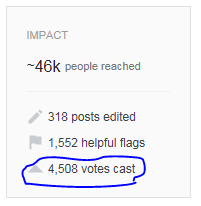 However, when I look at the breakdown, it's below:

I initially assumed that the "Impact" box was just being cached (because it seems to be slow to update), but then I noticed that the number in the "Impact" box is actually considerably higher than the number I see in the votes history breakdown; if it were simply a matter of slow-to-update cached statistics, I'd expect to see the opposite pattern.

Does the second number exclude votes on posts that have been deleted or something like that, or is this a genuine bug? (The fact that my Meta profile, where I hardly ever vote to close, shows the exact opposite pattern - 312 votes cast in the Impact box vs. 320 in the breakdown - would seem to suggest that the former is the case).

Exactly as you describe. The number in the grey box is the total number of all votes you've ever cast. The number in your votes tab is just a count of how many are being displayed back to you. We don't display votes on deleted posts to users in that list, so they're not included in that count.

Keep in mind that the grey box is only counting upvotes and downvotes. That count in your votes tab is for all votes you are allowed to see, including other votes that aren't counted in the grey box. The count is actually much further off than you might be expecting.

When I view your votes tab with my staff privileges, the actual count is 10,219.