Ads in other languages

This came up for me in Jobs: 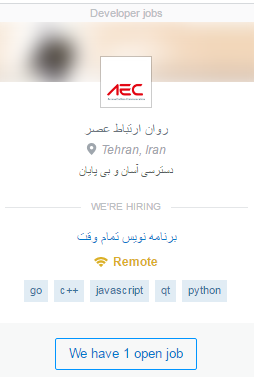 I cannot read or write Arabic, but somehow because it's remote it showed it to me. Should the employer be providing an English translation when they create the job ad? This way the advertisement could be shown in English?

I just don't see any benefit in showing this to most folks in the US at least.

Thanks for reporting this! That particular ad was targeted at visitors in Teheran, Iran, but due to a bug, we weren't applying that filter.

This should be fixed now.

Interesting topic, I would hazard a guess to answer appropriately we would need to have additional data points and address what might be held as common assumptions.

My personal opinion is that it seems that while US makes up a very large portion of the community there is an huge portion that is international. Especially when it comes to the questions from the new learners the posts often suggest English as second language.

While it may not make since for some of us in the US to see, I would hazard a guess that a very significant portion of the people seeking remote positions are outside the US. So could it be argued that one audience vs another is a minority?

Should the company provide an English Translation?

I think I agree with the others if the language is a requirement for the work then providing an English translation would actually be a disservice to the company. However giving the ability to provide multiple translations could be a huge benefit if multiple languages would be accepted.

Does it benefit the company?

Sure it could if they land an applicant that they hire assuming that the ad will be shown to international members as well as US members.

Somebody got paid somewhere.

Did you or I Benefit?

No I have no idea what that language even is.

Is there perhaps a more meaningful method of presenting ads for the company and the candidate?

Edit adding thanks to Nathan check out the geography maps in section 1:

It shows that while the US is the largest individual segment it doesn't represent half of the overall traffic and developers in the world.

Not the answer you're looking for? Browse other questions tagged discussion bug status-completed jobs .

8
Are job listings in another language allowed?