Is this intentional that the ad sidebar displays all positions from the same employer?

This is what I periodically see on my side bar: 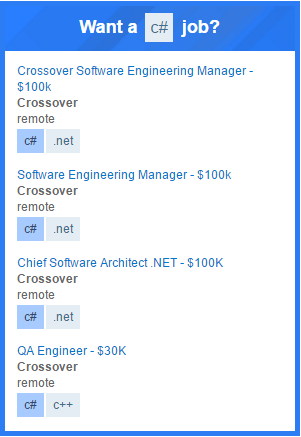 Do you think the algorithm for selecting positions, can be improved, so it does not display all line items from the same employer? Or is this intentional?

I wouldn't call it intentional, but it is the result of an ever-changing ad-selection algorithm. There was a recent change which made remote-only jobs considered a much better match for a large number of people. Unfortunately, there aren't very many remote-only jobs in the system right now, and if you combine that with a location where we don't have a lot of traditional office jobs, then you're likely to get what you got here.

As I said, we're constantly working on the algorithm, and feedback about edge cases like this are good. We're going to be making some short-term changes to help mitigate this, including treating jobs that offer remote similar to those which are remote-only, and several longer-term changes:

I don't think disallowing showing multiple ads for the same company is necessarily the right answer, but we'll consider it.

We have also recently started imposing a scoring penalty on ads that you've seen many times, so the more times you've seen a particular job ad, the less likely you are to see it the next day. Doesn't mean you won't see it tomorrow, just means it's less likely.

Hopefully that more or less answered your question.

Not the answer you're looking for? Browse other questions tagged support advertising .

32
How is the "Introduce Yourself" section rendered to the employer?
31
Speeding up Stack Overflow page loads due to doubleverify.com requests?
12
AS400, iSeries, and IBM-i are all the same system
14
Can't see list of available job positions when logged in
66
Use the same phrase in all badge descriptions for minimum score
5
Just how short does a code block have to be to avoid horizontal scroll?
5
"Very Low Quality" answer flags all declined around the same time