When reviewing LQPs or Close votes which are not obviously low quality at first sight, I sometimes click “Recommend Deletion” or “Close”, only to see what previous voters might have spotted.

Clicking the Close button in such a case does not mean that I intend to actually vote for closing. It means that I'm trying to get more information to find out what could be wrong with the post.

Now this got me fail a review of an obviously great answer. While reviewing, I thought: “What could be wrong with an answer that received +300 bounty?”. So I clicked “Recommend Deletion” – bam, fail.

In my opinion, “Recommend Deletion” audits should only trigger after the vote was actually submitted. It's not like an edit, where the audit would let the reviewer spend several minutes improving the post until he/she learns that it was only an audit.

Update (thanks @gnat): This observation apparently applies only to audits on LQP answers, but not on LQP questions, which is even more confusing.

Not enough, this failed audit brought me a review ban. As I knew that this was bound to happen some day, I've been collecting strange failed audits.

I know, I know … downvote the original posts etc. … but there are so many bad posts with extremely high upvotes, which are used for reviews. It's really annoying, because a failed review implies that you're doing sloppy reviews on purpose or at least negligently (“Stop and Listen!”).

So I decided to post a selection of some strange failed audits for the enjoyment of the community. Have a look at those and decide how you'd have voted.

These are only the real WTFs; I had some edge cases, too. (Edge cases are reviews that are not strictly compliant with the rules, but are usually well-received and not sanctioned.)

And, I admit, some of my reviews could have used a bit more attention, and failing the audit could have been avoided.

First off, clicking Recommend Deletion doesn't give you any additional information. It just lets you select a comment to leave for the benefit of the author. Which is a completely optional step. If a previous reviewer (or anyone else) has left a comment, you'll see it below the post - without having to click anything. You won't see it in the dialog. So if you're clicking "Recommend Delete" reflexively in hopes of finding something, you're just wasting your time - stop.

Even for Close / "Recommend Close", the click is a waste of time - the close reason(s) are displayed by default right at the top-left of the review page: 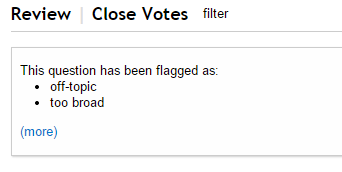 If you haven't yet memorized what the various close reasons mean, you can even expand that section by clicking "(more)":

The system remembers whether or not you expanded the reasons, so even if you always want to see what folks have voted for, you don't need to waste a click on every single review - just expand it once and go on your merry way.

There's an additional advantage to this as well: in addition to the close reasons previously voted for, it lists any reasons that have been flagged by low-rep users. This can be particularly useful when a low-rep user has identified a duplicate question:

We tried to do as much as possible to cram relevant information on the default view for reviews; try to get in the habit of using it, as it will make reviewing faster and probably improve the accuracy of your results.

Not the answer you're looking for? Browse other questions tagged bug status-declined disputed-review-audits .

39
Reporting bad review audit
12
Got review banned for one failed audit; I acted on the post but not in the way that it would expect
2
I've got "Review audit failed" unreasonably for selecting "Leave Closed" to a question with no changes made at all
40
Failed review audit by choosing to close question that is already closed
11
Review audit and guidelines