Too many incorrect reviews, banned for 1.5 years

As I'm currently without a job, I thought it might be useful spending some time on this site, e.g. by doing some review tasks.

Although I try to do this in a serious way, I've fallen into three "Stop and Listen" traps (as I didn't understand the second one, I'd added a comment). In top of that, I'm back after a ban for half a year.

Now I seem to be banned from the review for 1.5 year, after what seems like just three wrong reviews.

Guys, aren't you being far too severe here?

It takes real discipline to get yourself into this position. Whether it is through sustained apathy or recklessness, I don't know, and I won't even attempt to wager a guess.

Moderators do sometimes impose manual bans on reviewers who consistently make incorrect decisions in the review queues, but the maximum length of time that we can ban someone in this way is 1 year (365 days).

You, however, have been banned for 512 days. That can only happen via the automatic system, which doubles the length of the review ban each time you fail audits in close succession. This is evident from your review history ("Comment" is the explanatory message you would have been shown during each ban): 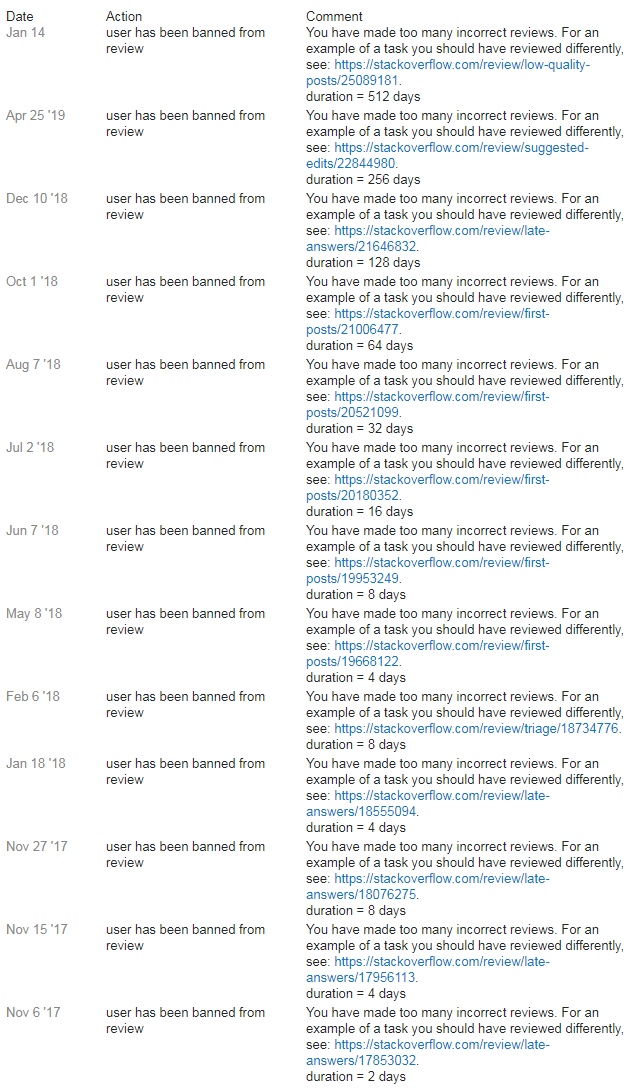 That is the automatic system working as designed, to catch bad reviewers. The hope is that they'll learn and improve. But even if not, at least they are stopped.

Let me say this again, just to be clear: feel free to take this as a signal that we do not want you using the review queues anymore. At this point, you are just doing more harm than good. Audits don't catch everything. All the incorrect reviews you've made in-between have just fallen through the cracks, potentially leaving poor-quality content up on the site. You've either entirely missed the point of reviewing, or you just don't care. Either way, find some other way to contribute to Stack Overflow, or don't contribute at all.

Not the answer you're looking for? Browse other questions tagged support review review-suspension .

243
2019: a year in moderation
89
Review suspension progressive system
2
Is there an appeal process for review queue access suspension?
15
Is there Review Ban History feature?

46
Should one stop reviewing when they sometimes disagree with review audits?
35
What happened to review bans?
10
What is the criteria for "too many incorrect reviews"?
9
Confused by duration of review ban for approving plagiarised edit