"Save Edits" button for a new nomination should not immediately post

When one nominates oneself for a moderator election, one is given a modified version of the usual post interface: there's a text view and a preview below it, and one button that says: 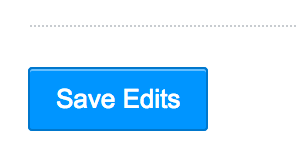 Which doesn't, to me at least, clearly indicate that my brand-new nomination is going to be posted as soon as I hit it. I suspected that it would, since it's basically the same as the tag wiki creation interface, but it could be more explicit.

Until the nomination has been made public the first time, it would be preferable that the button's title reflect its immediate effect.

(My title recommendation would be SUBMIT TO MERCILESS PUBLIC SCRUTINY, but I'll leave the final wording up to the UX experts, of course.)

Okay, fine, the submit button will now read "Post your nomination" when you haven't yet posted it.

Not the answer you're looking for? Browse other questions tagged feature-request status-completed user-interface moderator-election .