How do I hide my profile so employers don't rummage through my SO activities?

There's quite a few people out there who are quite comfortable with exposing their innards to the world, but there are also quite a few and possibly larger group of people who don't want individuals, businesses or institutions rummaging through our online history. For this reason, I normally bypass SO application forms and apply directly. Sadly, SO's application process is simple and fast without being hazed with online tests and competency testing.

Having been in the position of employing people in the past for small and large corporations, the hiring process is highly fraught with the most intense form of discrimination imaginable. Even the most minor blemish is magnified when considering a person for a position, especially for a high stakes one. I've always thought of myself as an open-minded and fair person, but I've caught myself too many times rejecting excellent candidates for the most trivial of reasons.

Without getting into too many details, an SO user's profile is a treasure trove for finding such rejections. Enough data can be gathered from a profile and reading through their discussions to form an opinion about someone, even if the activities were strictly professional. As an example, asking for help can be seen as a negative in the eyes of a non-technical hiring manager who may conclude the candidate is inexperienced. Simple grammatical or spelling errors can also hurt a candidate's chances, even though another user edited your Q/A and botched your literary masterpiece.

Perhaps I am barking up the wrong tree here, but I've always had the impression that SO looks out for the best interest of its user base. I hope my simple request isn't met with scorn or ridicule, but productive discourse, especially after the revelations of Facebook and other online organizations.

Having a Stack Overflow profile, or any other online presence for that matter, is a two-edged sword - you get the opportunity to showcase your skills and knowledge, but are also showcasing all the mistakes you make.

In short - you can't have it both ways. You can't hope to impress a potential employer with reputation points and shiny badges but expect them to overlook spelling mistakes and other less proud moments.

And frankly, if I were in your shoes, I wouldn't worry about that so much. If you are qualified for a position and didn't get it just because you made a typo on a Stack Overflow post a couple of years ago, chances are you don't really want to work there anyway.

The problem here seems not strictly related to SO itself. Your profile can show your growth and from an employer point of view it can be reassuring to see that you improved your skills constantly as time went through.

As an employer, I would also be very suspicious about a path without mistakes or embarrassing moments, and this brings me to my point: it's unhealthy for you to be worried about having an immaculate look, because is far from the real world.

The only thing I would only worry about is if your SO profile shows that as time pass, you are always at the same skill level, doing the same mistakes.

I'm going to throw out some random things that have come up in conversations I've had with people about this. It's one of the more frequent things folks bring up when they have an opportunity to chat with me at events and conferences.

Interviewing is a two-way street.

How an employer looks at your history is testimony to how they'll treat you. Read that out loud if it didn't sink in fully, because it's very important to know this. If they will nit-pick through the finest of details of you honing your craft or even crudely increasing its breadth (like diving head-first into a new language), then you probably won't like how they nit-pick your work on the job.

Additionally, look out for being generalized through a tiny glimpse of who you are. Stack Overflow says some of what's important to know about you when it comes to who they're gonna hire, it's in no way a full picture, and I'd be wary of anyone that didn't know that.

It's one source of possible signal.

Be wary of those that think less of you in the absence of an abundance of artifacts of spare time and / or boredom - remember you're interviewing them, too, and that's a red flag about work-life balance expectations.

It's supposed to be about growing.

If there's no room for showing what you were, then what you are somehow seems less significant. We all came from somewhere, we all made mistakes, we all asked basic questions, we all forget to check our tone from time to time - these are things that indicate that you're a thriving human being. If someone wants a 'whitewashed' history where you're a machine that just spits out solutions to complicated questions within minutes of them being asked, then they probably have some unreal expectations about a level of output that most of us would consider adequate-to-good.

Maybe they read some old books that poorly described what a 'good' programmer looks like, but do you really have time for that? Again, you're interviewing them through how they interview you.

Lots of good points have come up here. And I can't pretend that I've never been in situations where I took a job I knew I'd hate just because I had no other choice, where I knew by how I was interviewed and recruited that I'd be miserable. When you need the money, you need the money. As I was self-taught, SO was my best source of peer-validation, so I was especially happy to show it off (good and bad!). But you might not be. And that's okay.

The way this industry hires is broken and crappy. I like what we're doing in this field, I wish we could do more, and faster, but trying to set new bars for HR and hiring managers and recruiters to want to hit takes lots of time.

All I can say is, give frank and honest feedback when doing so won't harm your immediate goals; that's how companies ultimately rewrite what they know about hiring people. Sure, we do our best to help them succeed on our platform, which means they usually need to change their game around considerably, but they learn from you way more than they learn from us.

But seriously, if a company really raised a stink about something in your profile and it wasn't you always torturing animals in your example code through variable naming, there's something wrong with their idea of what to look for.

And, well, if you're like me - you probably think stuff about you looks way more unflattering than everyone else sees - it's just in our nature.

The replies of "you probably wouldn't want to work there anyway" are less-than-helpful for those of us who are long-term out of work and have zero right or luxury to be picky about anything.

I do wonder sometimes if a JavaScript question I asked years ago has ever cost me employer interest. It would be nice if there was some way to prevent that. I like my profile having my work history so I can send that over without having to retype everything, etc., but if I could keep my question history private, to where an employer only knows I asked that stupid JS question if someone happens to browse to it, that would be ideal.

The only thing I can think of that makes you look bad is using Stack Overflow to do your homework, like some people seem to do. It's dishonest and counterproductive and not what SO is made for.

Regardless of why, you can do this:

In profiles, select Edit Profile & Settings tab, then look down for 'Hide Communities'. 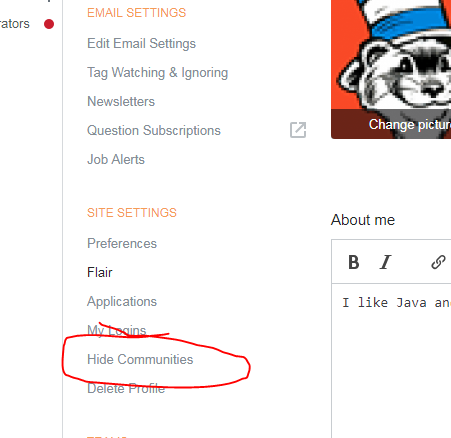 There are options in there for hiding any of the sites.

35
Is your Stack Overflow username submitted to employers?

7
How to hide a question from my profile (even temporary)?
46
Developer story: first impression
49
Don't show old title when a user removes it from the profile
5
How easy is to find my public SO profile from my Teams profile?
5
Can human resource managers find out about my Stack overflow profile through my Developer Story?