Who's the person with more answers than Jon Skeet? When will they catch him in rep terms?

Someone is working hard to usurp SO's first millionaire. They've already exceeded Mr. Skeet for number of questions answered, so who is it, and when (if ever) will they catch up in terms of rep? 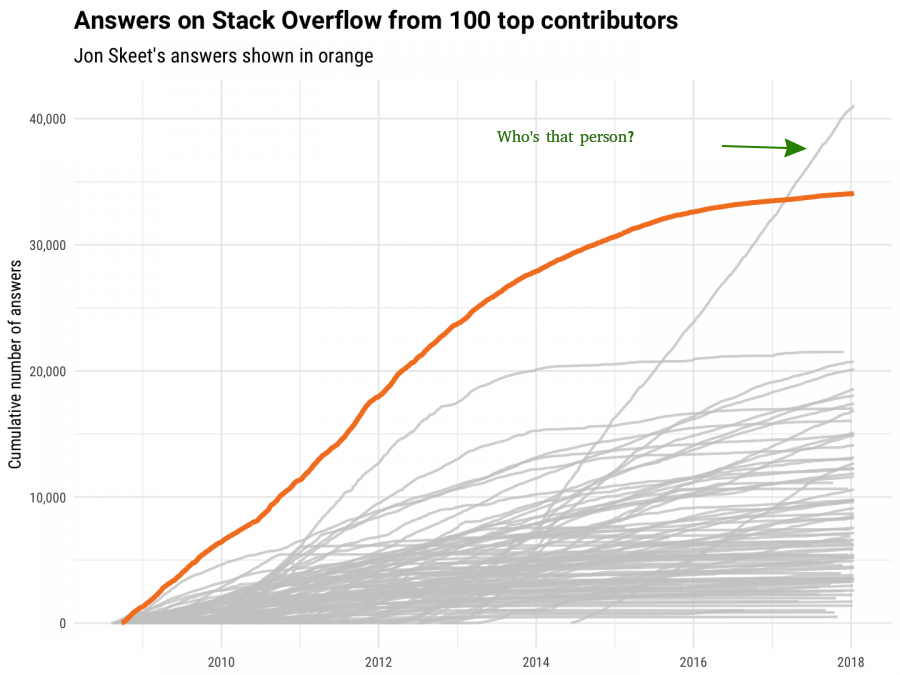 It's Gordon Linoff. The simplest way of guessing an eventual rep crossover is to look at the rep from 2017 via the Reputation League.

I'm currently 372,272 ahead, which would suggest that Gordon will overtake me in a bit over 7 years... if we both keep the same reputation rates.

The user with more answers than Jon Skeet is most likely Gordon Linoff, with 41,119 answers at the time of writing.

I looked a number of other user profiles but could not find anybody else with more answers than Jon Skeet. See, for example,

Here are a number of other heavy hitters:

Consider this post as an informal hall of fame for some of the most productive contributors on this site ;-)

I'm not going to guess how long it would take for Gordon Linoff or anybody else to catch up with Jon Skeet. This reminds me of the question If Jon Skeet never used Stack Overflow again, how long until he gets less than 200 rep in a day? (rep cap was mentioned in some of the comments here), which was closed as off-topic.

Using SEDE you could easily put together a query to find the user with most answers. It is indeed Gordon Linoff, as the other answerers here assumed.

There's an ongoing Meta Question on when (if ever) Jon Skeet will be overtaken as #1 in rep.

The short answer is "probably never".

The slightly longer answer is "If Gordon Linoff can maintain this frankly amazing pace, AND Jon stops answering new questions completely, still the best part of a decade".

882
Congratulations for reaching a million, Gordon Linoff!
102
If Jon Skeet never used Stack Overflow again, how long until he gets less than 200 rep in a day?
71
Why is "primarily opinion-based" a valid close reason on Meta?

33
When down voting with less than 125 rep
882
Congratulations for reaching a million, Gordon Linoff!
6
"Top users" for this week is completely messed up