Gaining reputation for edits past your 1k cap

In the days between that no approved edit of mine got deleted, altough I doubt deletions get substracted from your 1k cap. So was there a bug going on, or was this behaviour intended?

The reputation of this edit has since been retracted, by the post being deleted. For reference here the link to the now deleted post. https://stackoverflow.com/questions/47575885/vba-organizing-calls-conditional-export-of-worksheets-into-pdf (10+K only)

Edit: On December 1, the +2 rep got revoked by post deletion as mentioned above. A subsequent approved edit, December 4, did not result in a reputation gain, as would be expected. 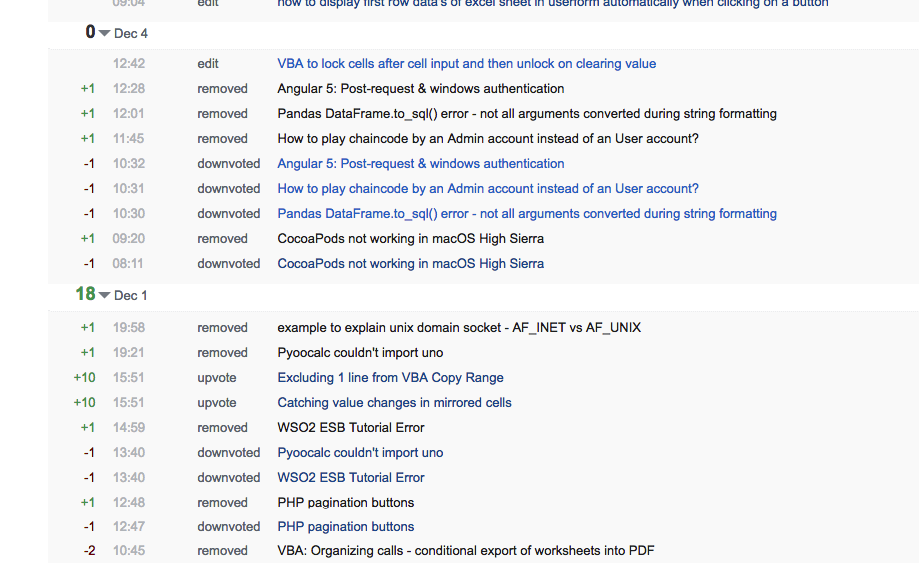 The problem here is that once the post is deleted and no longer affects your reputation, the system frankly stops caring whether you earned reputation from it or not. The two events that are now considered "deleted" just show the normal amounts of reputation you would have gained from them (+2 and -2 respectively) without considering any caps because, well, who cares? They're deleted. They don't affect your reputation anymore.

Trying to consider all deleted events when generating your full history with those events included is probably too intense of an operation and just not worth the extra resources for additional information that results in a net effect of 0. The system does the same thing for other types of votes which have been retracted too, even if they were originally different values (like a +9 for an upvote) when they were originally cast.

Not the answer you're looking for? Browse other questions tagged bug suggested-edits reputation .

67
Why don't you continue to gain 2 rep for edits once you've reached 2k rep?