A number of the Survey 2017 results are displayed as bar graphs, eg: 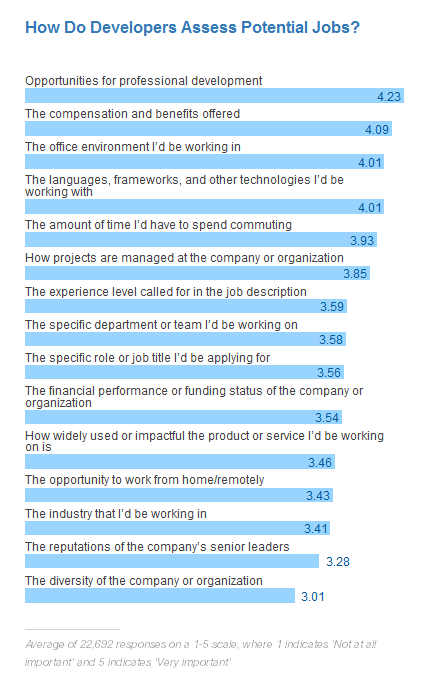 However, there's a problem. The length of the bars are misleading, given the fine print:

If the lowest score that could be given was 1, that should be the 'zero' of the graph. This problem really stands out with the 'attitudes to SO' graph: 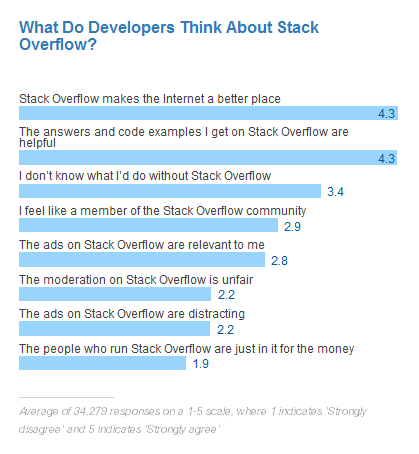 The bottom bar should in fact be about half the length it is, given that responses below 1 weren't actually possible to give. It should in fact look like this: 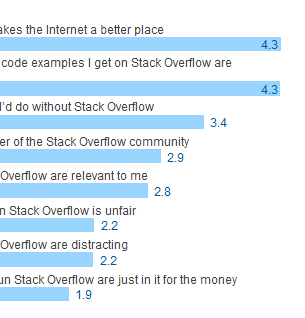 which makes the overall positivity to SO much more apparent.

I agree: bar graphs without scale are bad graphs.

A satisfaction level of 4.23 makes no sense because no user could choose that value. The median shows the value which is most "in between" the votes of users. The average suffers from false precision.

On the other hand, if you are measuring people's heights, which is a continuous value, it makes sense to take an average, since all values are possible.

I agree with the OP, the presentation is seriously flawed.

But why then, in the cases the OP raised, when the person who created the survey plots, attempted to calculate the mean from each set of responses, was a valid result returned (eg, 4.15)?

Because a human chose to encode the values comprising the variable as sequential integers (1 - 5); this mapping -- i.e., {"strongly disagree" -> 1, "strongly agree" -> 5, ...} -- is arbitrary. In other words, A through E would have sufficed for the mapping just as well as the symbols 1 through 5

But because integers were chosen for the mapping, and integers have a bunch of well-defined arithmetic operations, such as average, minimum, maximum, etc., it's tempting to go to just hog wild.

In this instance, calculating the mean of the mapped responses is full of assumptions, not the least of which is that the values are separated by an equal interval (another is usually referred to as paired-comparison intransitivity, which if I had correctly learned the first time around, I would never have had the privilege of taking Advanced Probability Theory a second time).

choose a representation that removes the dependency on all of these assumptions by avoiding the mapping step altogether (other than as a plot-annotation convenience, eg, "1" means "Strongly Disagree"). This way, i have no contrived symbols that look like integers which trick me into thinking they are integers that I then mistakenly do arithmetic on.

a standardized distribution of response counts

Won't a separate bar plot for each question make the viewport too cluttered?

If done right, it'll look very clean, what's more, this is a fairly routine technique to plot data of this sort. A plotting library based on Tufte sparklines would do the job nicely. What's more, displaying these in a single column (e. g., immediately following the question) and standardizing the counts, would allow quick visual comparison among question responses by the reader.

Not the answer you're looking for? Browse other questions tagged bug survey-2017 .