So while being a good little StackOverflow user, and answering a question for once, I noticed that I was having to constantly switch between my code block and the rendered output to check that my code was formatted correctly.

This was because my code was being wrapped by the painfully small text area that you write markdown in.

The code in question was some Java code that was inside an if statement, in a for loop, in a method, in a class. Now if you're keeping track that requires 24 indenting spaces to be formatted correctly in the rendered output. According to my rough guess, that's 1/3 of our precious precious text area width taken up by.... whitespace 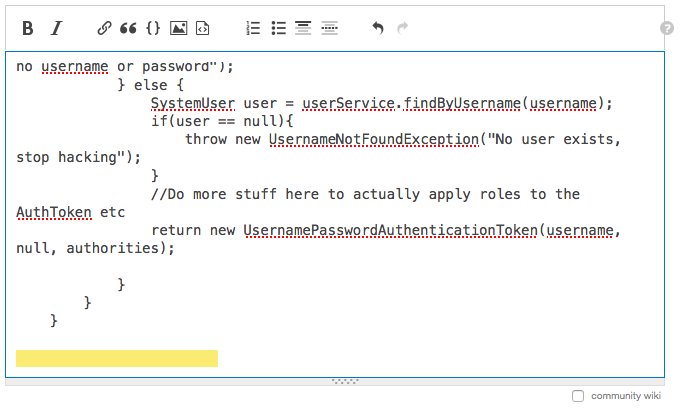 Now I read this question and agree, that when viewing a question, having the whitespace margin makes sense, the post is contained, and attention is drawn to the post's content, and long lines aren't wrapped and can be scrolled to view. But when you're writing a question/answer, you care a lot more about how the content will look when it's rendered.

When you're writing code, especially if there is a lot of it for a particularly detailed answer, you've got a Shlemiel the painter problem because the more code you write, the further you have to scroll to check that it's rendered correctly.

Is there some way that we can make the margin smaller when asking/answering a question so that we can better visualise what our code will look like? I know it's not a fix, but it'd be better than nothing.

One thing that I find works for me is if you write the code in an external text editor and then paste it in, highlight it all and then press control+k (or cmd+k) then it puts that whole selection into a code block for you rather than you having to ensure that each line is being formatted correctly.

-2
Why stackoverflow's website is not optimized to big screen?

15
Just had a suggested edit with no visible edit
3
How to format this kind of code?
11
A place to ask about specific code to make sure I'm programming correctly
11
Why does the editor suffer when using a lot of stack snippets?
12
Increasing number of new questions with broken code?