I recently flagged a comment as not constructive. Later, when that comment was joined by others of the same kind, I flagged the answer under which they were posted with a custom flag for mod attention.

...So the mod who looked at my second flag saw nothing to act on, and declined the flag.

I'm really not having good luck with the flagging system. I've seen constructive comments removed, rude/offensive flags declined but then the comments get later nuked anyway, and now helpful flag actions causing declined flags. Should I keep at it with flagging and commenting, or am I just so bad at both that I should give it up?

I didn't handle the flags on that post, but I think I know which one you're talking about. For the sake of discussion, here are how the comments went on that answer: 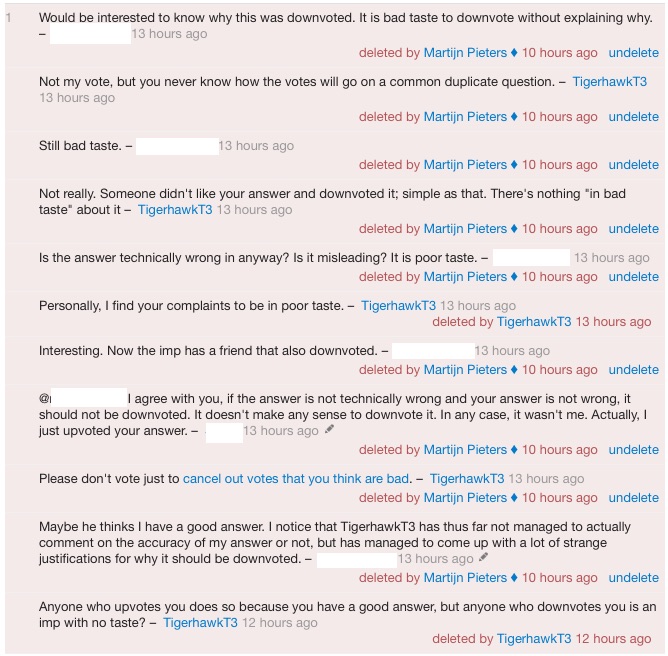 If you don't like someone complaining about downvotes in an answer, simply flag the complaints and move on. Repeatedly engaging the poster like you did here provoked an argument that could have been avoided.

Your flag on their comment led to that conversation being cleaned up. You then also used a custom flag on the post:

Someone downvoted his answer, and now he's complaining about the downvoter's bad taste and calling them names. It's also started to attract sympathy upvotes.

which was declined, possibly because the comment flag already took care of what needed to be done there. Also, there's nothing we can do about supposed sympathy upvotes, since we can't see who voted for it or why.

Not the answer you're looking for? Browse other questions tagged discussion declined-flags helpful-flags .

25
My second comment on a question disappeared
-8
What makes something offensive?