How to flag a question about abusing a system?

is based on an abusive idea*.

How to flag questions that are based on misusing? The question mentioned may be "too broad", but that's not the point. It is about "misusing" or "abusing", yet not "hacking". It's not spam. It is also neither offensive, which seems to be in the context of "hatred" (I'm not native).

Or: not to flag at all, downvote and set a comment that asks for clarification about the intention, to help solving the real problem?

* "abusive" has its shades. But if I were the sysadmin of a system someone wants to generate fake accounts for on a daily basis, I wouldn't like it.

Question below for < 10K users 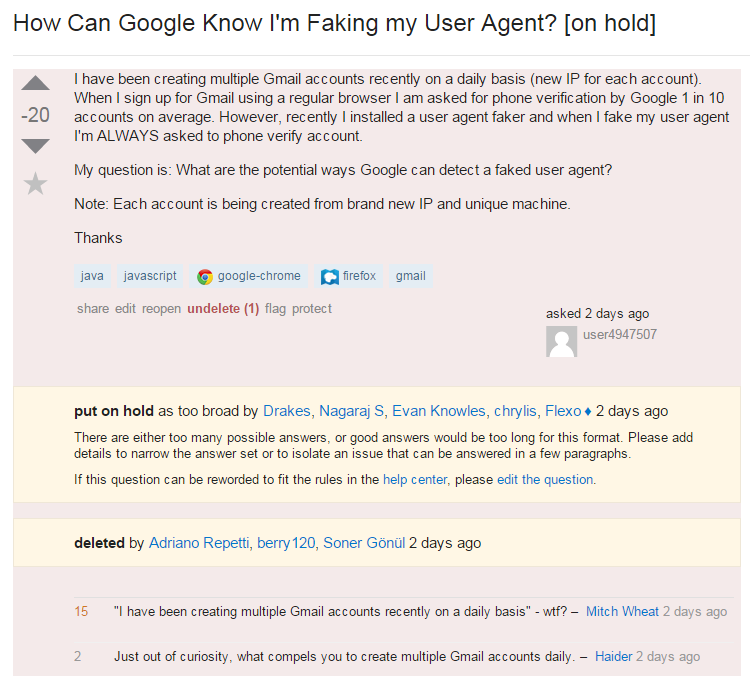 Technically, questions about hacking or circumventing blocks aren't disallowed on SO.
Provided that they are proper questions that focus on technical issues.

The question you linked to was way too broad, there were way too many possible answers.
Questions like that will (and should) get downvoted and closevoted.

I'm sure a portion of the downvotes on there was solely based on the questionable activities described. Technically, that's not necessarily a good downvote reason, but a user has the right to vote as he sees fit. Often enough, there are other reasons to downvote a question like that. For example, personally, I would have downvoted that question based on the fact that it's way too broad.

However, if the user would have left out the whole "creating multiple Gmail accounts" backstory, and if he would've put some more effort into the question itself*, the question could have been good enough.

*: He could have given some examples (even guesses) at what might be happening.

How to flag questions that are based on misusing?

I don't see a reason it is Stack Overflow's jurisdiction to remove questions related to hacking a system or related to circumventing the restrictions ona system. You might never know OP's intention unless OP states his intentions with the provided solution to his question.

I agree, that question is too broad, and it ended up well to be closed as "Too Broad". There is nothing to flag in that question, you have two options:

By the way, since the user has openly said that he creates multiple "Gmail" accounts, perhaps he has made the community aware. If the user tries to make any of his attempt here, you know his fate.

"abusive" has its shades. But if I were the sysadmin of a system someone wants to generate fake accounts for on a daily basis, I wouldn't like it.

I completely agree with your opinion. However, that is a personal opinion and Stack Overflow wouldn't disallow such questions.

There are so many questions related to database where OP wants to know how to login/access a database without password authentication. And they have had been answered. We don't know OP's intention behind it, whether he wants to do that on his production system or just curious to know. Whatever the reason be, it doesn't stop the user to post his question or someone to answer the question.

Or: not to flag at all, downvote and set a comment that asks for clarification about the intention, to help solving the real problem?

This question was too broad, so I would vote to close it as "Too Broad". And that's what happened.

If you don't know whether or not to close the question, and if you have a reason to downvote it, then downvote it and possibly leave a comment, don't flag it.

To conclude, I don't see a reason to flag the question as "abusing any system". It is closed, which is correct.

The original question was deleted so I don't know what it was about, but I will weigh in about the abusing aspect of the question.

I strongly feel that this on it's own it isn't a reason for flagging/deleting a question (or an answer). My argument is that knowing how to abuse a system is a tool, and as with any tool it can be used to do good or bad or even illegal things. It could be for instance that the OP wants or has the job to stress-test, find vulnerabilities or find the limits of a system.

Unless it is clear that the intent is to do harm, these questions shouldn't be flagged.

If however there is genuine concern about the intent of doing harm or taking illegal actions the post should be flagged for a moderator with a comment on the suspicion and reason of it.

Not the answer you're looking for? Browse other questions tagged discussion flags .

96
Should questions about programming viruses and malware be allowed?

7
Disputed off-topic flag on question about hard drive partitions
10
Wrong flag marked as helpful - improve the system
85
Why was “Needs more emoji” deleted by an employee?
8
How do I flag questions about third-party APIs?