Does voting count work on mobile site of Stack Overflow?

I have gotten the "see vote counts" privilege on Stack Overflow, and I visited a lot of downvoted and upvoted posts on Stack Overflow on the mobile site, but I can't see number of upvotes and downvotes.

Does the mobile site not support it?

No; the mobile version of Stack Exchange does not support viewing vote counts:

The gotcha is that a lot of android phones really don't have the click accuracy you need to distinguish between up vote, down vote, and show vote split clicks. It's really quite frustrating trying to vote and accidentally displaying votes or vice versus.

Since it's such low priority information, I pulled it. We might revisit this when the balance of android browsers shifts, I hear through the grape vine it's gotten a lot better in the latest and greatest versions. Still too many old ones out there right now though.
Source

A workaround would be to switch the desktop version by clicking the link in the footer or to use the Stack Exchange mobile app (iOS | Android), which does support this feature.

Thanks to the new responsive design, viewing the vote counts is now supported on mobile. 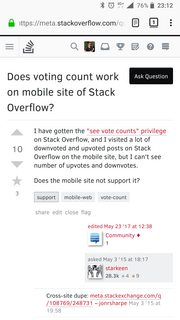 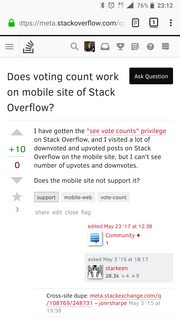 32
What is "Disable Responsiveness" in the footer section of Stack Overflow?

105
How does Meta Stack Overflow work?
140
Why does it take 1000 reputation to view the vote count?
1
How do I format code in mobile Stack Overflow?
4
“Request desktop site” on iOS still gives me the mobile site