Should I edit an answer that refers to a deleted answer on the same question?

Just today I noticed a reputation change in my Recent achievements. I had been upvoted on a non-accepted answer I gave last month. When and if this happens, I like to revisit the question to check the other answers - to see if there's an accepted answer and what better methods I could learn.

When I originally found this particular question, there was one other answer. It hadn't completely worked for me, but definitely got me where I needed to go to solve the question myself. So, having learned from it, I posted an answer designed to expand on it - in case someone else had the same issue as me. I referenced the other answer (although I erroneously linked to the question instead) in my own. When I revisited the question today, I noticed the other answer had been removed.

Should I change my answer to no longer mention the non-existent one? And should I add the now-missing lines of code to my answer? (Yes, I still have them in the test project I originally made.) I dislike not being able to still give credit to the post that helped me in the first place, and I also wonder what kind of obligation we have to keep our own answers up-to-date. (Easy for newer users, but some users have 100's or 1000's of posts.) 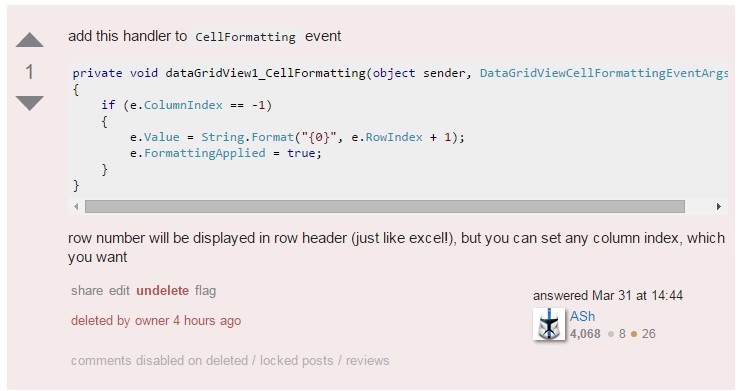 I agree that you should edit your answer to include the now-missing code that it referenced. This ensures that your answer remains comprehensible, which is of course an important goal. :)

It would bother me too.

Here's how I think about it: while I think it's good to preserve a mention of the original authorship, once that person has deleted their answer it's almost as if they never wrote it in the first place. It's kind of hard to plagiarize something that never happened. :)

On the other hand, what if Einstein had somehow gone back in time and destroyed all evidence of his work on relativity? But someone else had seen that work and then used it in their own work. Should that someone else still cite the now-nonexistent work by Einstein? Does the answer depend on whether anyone else in the world also knows it ever happened (e.g. hypothetically let's imagine Einstein also somehow destroyed everyone's memory of his work, except that one someone else…Einstein was just that smart :) )?

Note that on Stack Overflow, once a post is deleted, many users will never see it or know it ever existed.

Me, I think it doesn't hurt to provide the citation and it's intellectually more honest. But once the answer's been deleted, there's no need to mention the answer itself specifically, unless you find that the simplest way to describe the other person's contribution (you could just say "I based this on code I got from user ASh", for example, without a mention of the specific answer).

I think the word "obligation" would be too strong.

I do think that as users, we each are encouraged to do what we can. If we're aware of a need to improve an answer, and we have the time to do so, we should. It's the right thing to do.

But one key feature of the site is that the community has the capability to edit and improve. Fact is, with very few exceptions, there's almost no person contributing to this site that is uniquely qualified to answer any given question. If you could improve the answer, then so could someone else. And if you don't get around to it, probably someone else will. And if they don't, then it might not really have been all that important in the first place.

So, no…I don't think you should feel obligated to go back and improve answers, nor feel badly if you are unable to. It's nice if you do, and there's even a good chance someone will be grateful to you if you do. But there's no obligation per se.

Add the code so that your answer remains complete and useful but just add a note that the answer you're referring to was from ASh and has since been deleted.

2
Question about a deleted answer
38
Is it OK to edit someone else's question or answer when the choice of accepted answer otherwise contradicts the question?
88
Is it wrong to upvote an answer to a question just so you can close another question as a duplicate of it?
6
User accepted my answer, then completely changed the question and 'unaccepted'
1
Changed accepted answer, and then the user deleted the one I originally accepted
3
Edit an answer to make a correction, or post a new answer?
8
Should I also keep checking for any updates in all the posts that I've flagged?
24
What should I do when the only correct answer to the question is getting deleted?