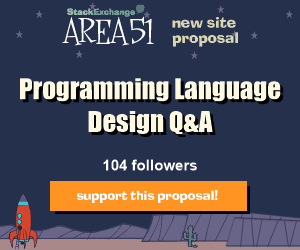 I'm supporting a proposal to create a new Q&A website for designers and implementers of computer programming languages.

It's built on the same software as stackoverflow.com, a hugely popular site where over seven million programmers help each other with difficult programming problems. On Stack Overflow the audience votes for the best answer, so the answer you want is usually right at the top, not on page five.

I'm hoping that a site for designers and implementers of computer programming languages would have the same kind of network effect and turn into an amazing resource.

The proposal process is going on here:

This user hasn’t posted yet.