That is inaccurate. In 2021 I was suspended for a month because of a Windows-Phone question I'd posted that year, and my attempt to strike up an honest and sincere discussion. I've been tip-toeing on SE ever since, but two comments attracted the ire of users who saw fit to flag them. My comments were utterly devoid of hate, prejudice, or animosity. No foul language, vulgarity, obscenity, or mean-spirited sentiment were expressed. The first comment was in support of a denigrated post, and its author, illustrating a paradoxical situation. Meanwhile, a dismissive comment—untouched–sneered at the OP's legitimate query.

My comments did not–and I quote–“spark joy”. Yet,

“…we do feel your heart is in the right place but at this point a longer one [suspension] might be in order.”

I'm not going trot out the code of conduct, but implicitly our rules have always been "Be Nice" - and the above comments were not.

The two culpable comments are:

Meta is the wrong site to hold a calm discussion or to wage a battle (take your pick) about comments, downvotes, moderator powers, deletions and ..etc. etc. You're talking to a hardcore user-base who started out as helpful but naive users [and then] later turned hardened and dogmatic. You're right. This site is not the place to have any discussion that is not about support or bugs even though it does have the discussion tag! –@Mari-Lou A

Later I replied (an error)

Ha ha my comment about comments being deleted even when the discussion tag exists, got deleted. The rules: extended discussion.must.be.exterminated.because.SE.is.not.a.forum. Exterminate. comments. Migrate.discussions.to.chat.Exterminate.fun.Exterminate.human.interactions. But somehow it's not always consistent, see here?

The “here” linked to an extended discussion on Meta.

UPDATE Currently suspended on Meta SE for one month (October 13, 2021) because this comment was the final straw.... 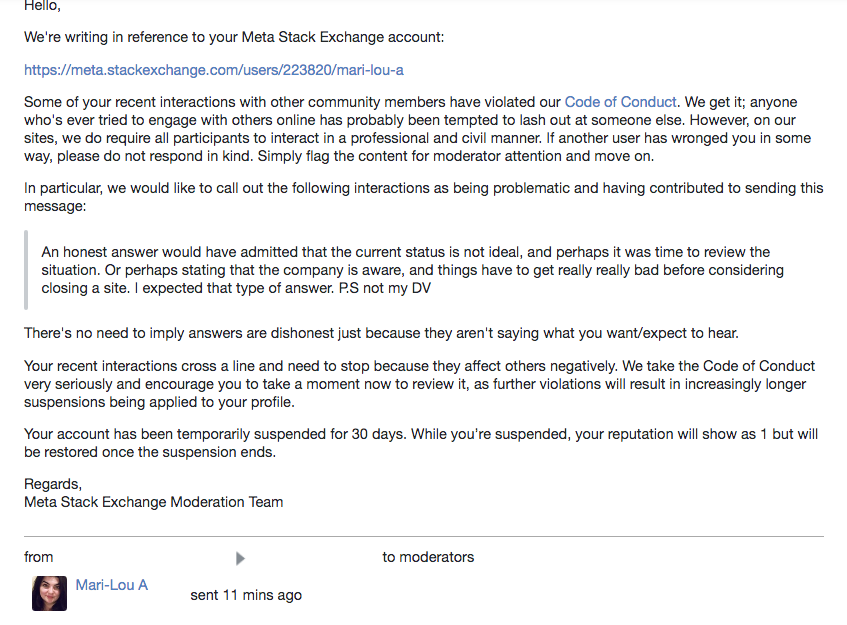 Comments mostly deleted because it seems I was instigating the closure of a site, luckily I had left the page open so I took a screenshot. 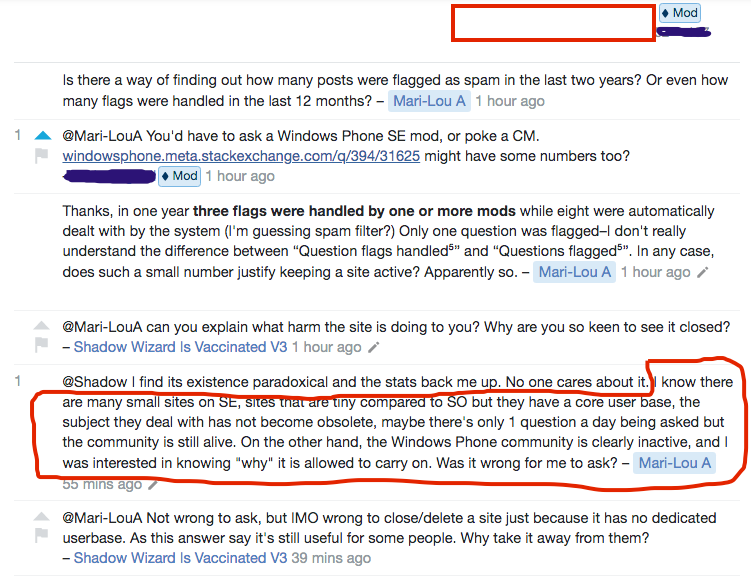